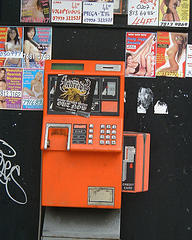 London is getting more dangerous by the day ladies and gentlemen. It's not enough that a quick trip down Oxford Street is going to leave you gasping like a floundering flounder on the deck of a homeward bound fishing trawler, now you can't even grab the number of your local brass from that phone booth down the road in safety. Well, not if you live in Camden, so breath easy SE London for the moment.

The cards advertising various 'private services', and most of which could have London's sex trade up for serious breaches of advertising standards, have long been at the heart of a daily battle between those who put them up and those who take them down. Today the Camden Gazette reports that it's become a dirty war, as cards are being laced with razor blades or toxic chemicals (the scent of their clients?), to cause injury to those trying to remove or rivals trying to replace them.

In the same week police reported on how schoolgirls are being groomed for prostitution, this is yet another downwards turn into the vileness that lurks beneath our furrows and hedgerows. It ain't all Billie Piper in a boudoir full of Agent Provocateur, people.

However, more disturbing perhaps than analysing the sex trade with basic demand = supply economic theory, is the news that children as young as nine have been known to collect these cards.