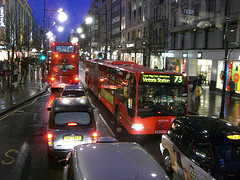 OK, so maybe not kills, although it might, but it is bad for you. Details to follow.

A new report shows that shopping in an area with a high volume of traffic has a worse affect on your lungs than walking around a park. For a moment this looks like one of those no shit Sherlock stories; however, the study is specifically related to people with asthma and the effect that diesel engines have upon them. Diesel engines can apparently generate more than 100 times more particles than petrol engines, none of which are good for you, and all of which had a quantifiable effect on the 60 asthmatic human lab rats forced to walk up and down Oxford Street for 2 hours (thereby forcing them to suffer both physically and emotionally). Still, that's a pretty breathtaking figure for the 5 million plus asthma sufferers in the UK.

The point is made that this study does not relate to petrol engines or those without asthma but we would have though that's common sense. Although it's always good to have science agree. After all, cars, buses, taxis,smokers etc, emit lots of lovely chemicals that the human body is not designed to cope with. And trees don't. Ipso facto or something like that.

Dr Cullinan of the Royal Brompton Hospital points out that the real message is not for individuals with asthma but for people who plan traffic and build engines. We're sure they're all ears, but at least everyone else involved agrees that the end result is ever increasing misery for asthma sufferers whose numbers seem to be rising year upon year.

You could of course do all your Christmas shopping online. You may have to wait till New Year for everything to arrive, and you're probably contributing to economic collapse as all the retail figures drop off. Once you've read that: Oxford Street also had more than three times more nitrogen dioxide in the air and six times as much elemental carbon, then you may stop caring about the economy and decide that breathing is a whole lot more fun.