Cop A Load Of This Portfolio 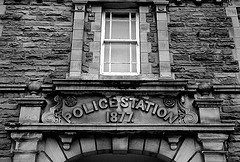 First it's our music venues, now it seems even our police stations are up for grabs. With a potential value of £1.5 billion, the Metropolitan Police property protfolio is quite a cash-cow. No wonder then, that they're going to be reviewing the number of nicks. This asset Management strategy predicts that some stations may close to be replaced with smaller facilities across the (32) boroughs.

Unsurprisingly, there are a few concerns. Mike Green, councillor for Hampstead Town ward:

What we've got in fact is a building which is in place to ensure the security, the safety of the residents, the businesses of Hampstead and of London.

...getting rid of some stations will allow them to set up smaller offices in places such as libraries and churches to house its Safer Neighbourhoods Teams.

Libraries? Can you imagine Assault On Precinct 13 taking place around a library?!? Still, should cut down on the number of book thefts, and those returning their reading late could be deterred from further felony with a short spell in jail.

Will this work? Will it make London a safer place to be and ensure speedier response times? Will there be enough parking for the squad cars? Well, if it's another idea from the powers that be to save money and improve efficiency, then the good money says not a chance.