What Next For Waterloo? 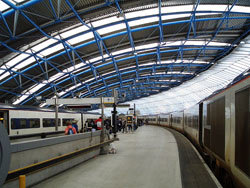 The trains have been re-routed, the signage amended, the tube announcements re-recorded (completed, luckily, before the woman behind them was given the heave-ho). The re-opening of St Pancras means that Waterloo's reign as Britain's main international train station, a duty it fulfilled without complaint for thirteen years, is well and truly over.

But what to do with those elegant Eurostar platforms, so admired in their mid-Nineties infancy? The plan in the short term is to switch them over to mainline services, with one of the five platforms scheduled to open for domestic services in December 2008. In the meantime, the cost of ripping out those old security scanners and customs offices has been estimated at £100,000 by a junior transport minister, with figures of £500,000 bandied about for keeping the "wider facilities" secure.

As for the other four platforms, options are apparently "being assessed". If the place is going to be left abandoned for a while, they could always recoup a bit of the maintenance costs. Perhaps they could re-invent them as London's longest art gallery (they could line up all those Gormley statues that glowered from the rooftops in the Waterloo Bridge area during the summer). Or transform them into a half-mile long champagne bar, thus bringing in the weekend boozing crowds whilst neatly thumbing a nose at one of the crowning glories of that St Pancras usurper.