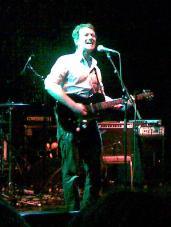 Whilst the Sex Pistols and The Verve were hawking their wares for the proper reviewers, Londonist was hightailing it down to the Empire for an early start. Since The Broken Family Band cashed in the cool Cambridge climes for our dirty old town, we can now legitimately claim them as our favourite London band (no doubt to howls of protest from the other Londonist writers and possibly the guys themselves). TBFB (for all you acronym addicts out there) made their name with some damn fine country tunes and Steven Adams' wryly dryly sardonic humour, but the lack of good clean air in their lungs has created something of a rock monster of late.

So they may start with almost a whisper but soon enough Jay Williams is rocking into some meaty riffs like a man who's almost watched one too many Neil Young videos. On the other side Gavin Johnson takes it easy on bass and chair and behind them Mick Roman alternates between caressing his skins to beating the living shit out of them. Out front Adams maintains an air of ironic amusement at this whole being-in-a-band thing:

We're supporting The National and you're not. But then again you probably didn't have your dinner in The Walkabout.

He's a little quieter than normal, but this isn't a home crowd and there's none of the frenzied frugging that usual accompanies The Booze And The Drugs and only a half-hearted show of rock ears (!,,!) during the audience participation moment in Twelve Eyes Of Evil. A few golden oldies then, but the bulk of the set is drawn from this year's Hello Love (available to buy now from all good music retailers for all your friends for Christmas) with all the quiet bits that much quieter and the noisy bits that much noisier, which is no bad thing at all in our eyes. An unfamiliar crowd react warmly to their generally being very very very damn good-ness and so the word spreads. Remember, if you hadn't already heard about them somewhere else, you heard about them here first.

We'd been told once that The National live had reduced grown men to tears although we have to admit that we've rarely played our copy of Alligator so this is going to be a surprise. On record their brooding indie can come across a little morose, albeit scattered through with flights of pop frenzy. On stage they fill the hall with wonderful sound. And if from time to time they cross over into chiming U2 style stadium sized guitar parts they are at least the good U2 parts; y'know, the ones without Bono.

The National's key strength is the unlikely figure of Matt Berninger who seems to be so painfully shy and uncertain on stage he can hardly speak to answer the audience's call for more songs. Yet when he opens his mouth and sings, his voice (sitting in that same register occupied by the Eddie Vedders and Mark Lannegans of the world) is wracked with immersion. A near mumble just rips itself in to a primal scream and he twists and shakes, eyes clenched shut, across the stage, half hiding, half frenzied evangelical. It's quite a staggering performance, we're sold.