The eagle eyed amongst you will have noticed recurring mention of The Broken Family Band in our mid week gig listings. So after taking a listen to Song Against Robots and deciding that they were really quite brilliant; DiS described them as country-flavoured rock 'n roll and sound not unlike Pavement being buttfucked by the Anthology Of American Folk Music which we couldn't really argue with. Then we heard a copy of this year's Welcome Home Loser and, well, with its darkly fuelled country, it's one of the best and most interesting albums we've heard out of this country this year. So we thought it was time to subject them (well, Jay the guitarist) to the Londonist Music Questionnnaire ahead of their gig at Spitz this evening.

If you're in any way grabbed by the aforementioned Robots or the gentle loving ballad Honest Man's Blues then you'll be pleased to know that the guys have been kind enough to offer a copy of their latest long player: Welcome Home Loser.

All you have to do is email us here at Londonist Music (londonist.music@gmail.com) with the answer to the following near impossible question. And don't forget to put Family in the subject line.

What does Cambridge have lots of?

So enough of the intro tape and on with the show.

Who's In The Band?

What Do You Do In The Real World?

We’re a pretty mixed bag really, bit of IT, video editing, web sales, charity – it’s all done to pay for strings and skins - but we’re all pretty happy.

Describe Your Sound To Us:

It’s evolved over the 4 years (3 albums and 2 E.p’s) we’ve been together, what might be considered a more trad. Americana sound (if that’s not a contradiction in terms) to a more rock orientated thing, but from the start I’ve always answered that question by saying we’re an ‘indie rock band with a twang.’

How Did You All Get Together?

We were all in ill-fated bands in Cambridge and had been friends for years. When splits and deaths happened we made each other happy again by playing ridiculous country-indie-rock at each other.

Who Are Your Influences?

We all cross each other’s tastes enough to not argue too much over the car stereo, but we all listen to vastly different stuff at home. Hip hop, metal, reggae, qawwali. It’s not important, unless you’re asking who the band sound like…?

What's The State Of Play With The Band At The Moment?

It has been a great year for us; we’ve done a small tour of UK and Germany, played Glastonbury, Green Man, Isle of Wight Bestival, Oslo, Stockholm; done Radio 1, 2 and 6 sessions; being flown out to Belfast and Spain for one off gigs later in the year, all good fun. Steve has just finished his brilliant debut solo album, which should be out by the end of the year. (Check the web site for details.)

Where Can We Hear / See You Next?

What's The Big Game Plan For The Band?

Make the best music we can in the time we have left. If you do it for any other reason, you’re going to end up heart broken my friend; believe.

Personally I’d like to support AC/DC on their next world tour. Will Oldham support would be pleasant.

What's Your Ultimate Label To Be On?

I guess Matador would be cool. (I always think it must be a huge kick for straight edge bands to be called up by Dischord, but obviously that wouldn’t be appropriate for us). We’re on ‘The Track and Field Organisation’, they send us all over the world, keep us in beers and pay for us to record whatever we like. What could be better?

What's the best gig you've ever been to?

‘trying to think of gigs we all went to. Personally, being at the front of AC/DC playing Hammersmith a couple of years ago will be hard to beat for me. SLINT were pretty good a year or so ago. We all enjoyed the MR. Bungle gig a few years back too.

Have You Ever Thrown A TV Out Of A Hotel Window?

Hell no, what if it hit someone?

Any Great Stories From The Road?

What goes on the road, stays on the road. We’ve had some scrapes in Amsterdam and Hamburg, and some Spinal Tap moments here and there.

Recommend One Album To Our Readers You Don't Think They Will Have Discovered.

We’re all agreed that the ‘The Carlton Chronicles’ by South San Gabriel is velvet on the ears. They’re drummer rules.

Why Should Londonist Readers Go And See You?

You wanna come along? then do. I’m not going to talk you out of your comfy chair and slippers.

Venue To Play In London? The 100 Club

Venue To Go To In London? The 12 Bar Club off Denmark Street.

Record Store? I get all my records off the www’s now, sorry, I have no soul. Rough Trade is cool.

Shop (non-music)? There’s a new music shop in Southampton we saw on our way to the Isle of Wight a week or so ago. It has walls full of guitars with amps ready to go, and sythn kits all head-phoned up. Must get back there and blow some serious cash. Who cares about non-music shops?

Place To People-watch? Any bar in Soho.

Place To Chill-out? At home with a bottle of Pinot Grigio.

Place To Get Lashed? Oslo.

Place For A Post-gig Kebab? We tend to eat before gigs just to get ourselves horribly bloated. Any curry house will do.

What Advice Would You Give Ken Livingstone?

Tell the public where the money’s going Ken. First there was no congestion charge, now there’s millions pouring in every day – anyone seen any difference to buses or tubes?

What London Place Or Thing Would You Declare A Landmark?

Hey, I come from Nottingham, and 3 of us live in Cambridge…

The World Is Ending In 24 hours. How Would You Spend Your Last Day In London?

Getting out of London.

Have You Ever Been Sick On The Tube?

No, but I’ve come very close to losing my mind on there. My bladder always seems to know the minute I start on a long tube journey too.

If You Get Rid Of One Part Of London, Which Bit Would It Be?

I have friends who would put Dalston pretty far up their list. 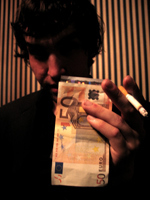 Greatest Thing Ever To Come Out Of London?

Three quarters of The Broken Family Band heading back up the M11 week nights after a gig.

What Advice Would You Give To Someone New To London Getting On A Night Bus For The First Time?

Find the maddest (as in crazy) person on there and act madder/get off and get a registered black cab.

If You Could Write A Song About London What Would It Be Called And What Kind Of Song Would It Be?

I’d call it ‘Freeze the Thames’ and it would be about me winning a gold medal at figure skating in the London winter Olympics.

If you're a band looking to get coverage in Londonist, get in touch with the music team, after reading these handy tips on How To Get Into Londonist's Music Posts.