At Our Back in a Cold Blast we Hear… 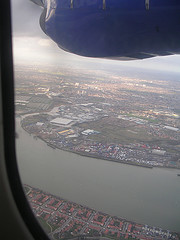 ...that the government’s gone a bit loopy, actually. They are still banging on about developing the optimistically titled Thames Gateway region into some eco-wonderland filled with gainfully employed and happy eco-bunnies. Yvette Cooper was due to, er, ‘clarify’ exactly how this can be achieved and for how many spondulicks at a brainstorming forum today.

Now Londonist knows that London needs a bit more housing, and is all for the creation of well budgeted, environmentally-friendly utopias all over the home counties. Hey, we just loved that Star Trek episode with the terraformer dudes – it is really exciting to think that you can take something uninhabitable and render it des-res.

But it must be out of conceit or desperation that the Housing and Planning people are eyeing up the floodplains and wastelands that constitute the lower Thames corridor. Conceit in as much as no-one has ever thought to do it before. None of the waves of invading tribes over the millennia ever deemed it fit enough for a colony. Why, even London itself is a rum spot for a settlement, let alone a great hulking city. Desperation in as much as the land in question is very low-lying: these really are floodplains we are talking about here, and the first sign of a mighty high tide, you can bet your bottom euro-grant that they’ll shut that old Thames Barrier and wave at the poor wet-footed sods downstream. Ah, and then there’s the problem of where exactly to build: there’s a choice of brownfield – contaminated land clawed back from the clutches of former heavy industrial plants, or nature reserves – the Kent and Essex marshes are national treasures of a sort, home to all sorts of (OK obscure, but…) indigenous species. Them planners are caught between a rock and a soft, squidgy place, wethinks. And whatever they do, it’ll cost the earth + a bit.

Sweet Thames, run softly, for we speak not loud nor long.

Don’t do it, guys. Go colonise the moon or something.