The Prince Of Poaching? 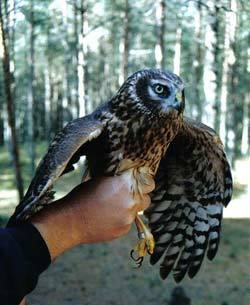 October hasn't been a great month to be a Royal. If it's not a blackmail attempt, or being immortalised in bronze for a controversial sculpture, now they can't even go out for a spot of recreational rare-bird shooting without some spoilsport kicking up a fuss.

It's been reported that Prince Harry was interviewed by police after two rare hen harriers, a legally protected species of bird, were shot in flight at Sandringham. The prince and a friend were the only people known shooting on the estate at the time, yet have denied any involvement whatsoever.

There are only 20 breeding pairs of hen harriers left in England, compared to 500 pairs in Scotland, Wales and Northern Ireland, and it is on the RSPB's "red list" of endangered species. A spokesperson for the RSPB suggested that gamekeepers often view the bird as an enemy due to their natural diet of game birds.

After his out-of-town adventure, we're expecting the Prince back in town for Halloween. Surely him and his pals at Boujis are planning some japes for tonight, possibly involving dressing up in politically insensitive garms and larking about like the Empire never fell. Come to think of it, perhaps he was after the birds' plumage for an elaborate headdress?

Image of the hen harrier from West Coast Birding's Flickrstream