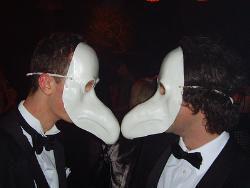 Well, we hear you say, haven’t you reviewed this event already? Shouldn’t you get another hobby, say crocheting? Fun as crocheting may be, after one Londonista’s outing to the Red Death Late Nights following her participation in The Mask of the Red Death at BAC, this Londonista decided to try to see if one could attend the Late Night extravaganza without having seen the previous show. Would it be as fun as crocheting*?

Well, suffice to say that on the night we went, the party was a-kickin’. There was a band – the house band, we were told – with an amazing singer. The actors were brilliant, mingling with the party-goers, trying to give us an experience that extended beyond getting drunk, falling over and crawling home in disgrace. Even without prior knowledge to the performance, stand-alone incidents occur which makes everything just a little bit more special. Londonist was medicated by a lovely young lady - to this day we still don’t know what we were given, but we haven’t had any side effects (except perhaps a bit of flatulence, but maybe that was just the beer). When actors come up to you, go with the flow, see what happens and you might have a lovely (or just plain weird) experience. If you meet the ghost dog, play with it. If the zebra wants to dance with you, dance with it. That said, this is less of a performance, and more of a club night, and you can definitely have a good time at BAC after hours – bring some mates, have a drink and a dance and see what happens.

*Londonist isn’t implying that crocheting isn’t fun, but since this Londonista’s aunt poked a crochet needle through her index-finger, the appeal of the craft just hasn’t been the same.