London Yanks Offer Thanks (And Cash) 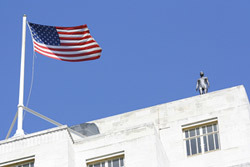 Living thousands of miles away from the White House doesn't mean you can't have a say in who's going to be living there come 2009. According to a report in The Times, London-based Americans have raised 40% of a $1 million overseas war chest for the candidates in next year's presidential election. Thus far, Barack Obama sits top of the class, with £36,000 solicited from Britain since June. His Democratic rival Hillary Clinton has collected £18,000, while Republican frontrunner Rudy Giuliani has trousered £4,500.

Rarely reticent about glad-handing the masses on their way to Washington, key campaign figures have been stepping out in London recently. Last week Obama's wife, Michelle, pressed the flesh at a fundraiser, while the Republican frontrunner Rudy Giuliani wowed the ex-pats in Knightsbridge in September. There's good reason to keep their London fans sweet: once both parties have nominated their candidate, they will be able to accept more donations from foreign voters.

We wonder how this pandering to ex-pats would play in the States. Americans tend to get prickly about their democratic process. In 2004, when The Guardian ran an ill-advised campaign attempting to sway the vote of that year's US presidential election, Americans rightly denounced it as a nefarious attempt by a foreign agent to meddle in their business. Many of the donations come from people who, despite retaining US citizenship, are residing permanently in Britain, and it might do the candidates well to keep quiet about their foreign fans when on home soil.