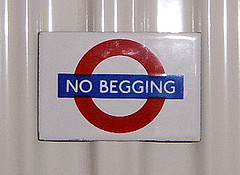 It's possible that some of you, dear readers, may occasionally travel upon our world famous London Underground. And possible that you may have experienced some discomfort while doing so, maybe a little over-crowding, maybe a little lateness, perhaps even the odd denial of service. Some might argue that these occasional 'blips' in your commute might have arisen through the failings of the tube maintenance firm, Metronet (now in administration after a predicted £2bn overspend).

So you'll all be happy to hear that while TFL bid for the firm, a deal had been reached for a change of management including sizeable and undisclosed pay-offs for outgoing managers.

Do we really need to say any more? Anyone wishing to form an angry mob, please leave your name at reception and don't forget your torch and pitchfork.

Meanwhile, Transport Secretary, Ruth Kelly, wins the 'no shit Sherlock' award for stating that It's pretty clear that transport is a barrier to the growth of London. Really. And what would the government know about London's transport?

I use the Tube at the weekend and I regularly use the public transport system... I use the railway service frequently and I'm absolutely sure that sometimes that involves standing.

We're in safe hands then. The government are investing very significantly in London's transport links and before you know it we'll have superThameslink (8 years) and megaCrossrail (10 years).

What really worries us are Kelly's comments that these projects could in due course be the largest building programme in Europe, possibly the northern hemisphere. Talk about not piling on the pressure. Luckily there's a group of 'businessmen' with related experience who are suddenly available for work.