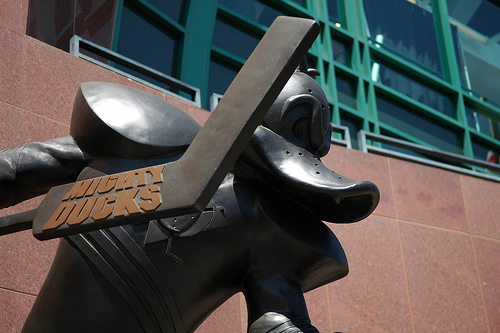 It's entirely in the nature of ducks that they can fly under the radar, but only in fairy tales do kings arrive unannounced. Nevertheless, even those who would count themselves fans of ice hockey may be surprised to learn that the O2 Arena this weekend hosts not just one, but two clashes between a pair of North American professional teams. And not just a pre-season slapabout, mind you. These are the opening fixtures of the brand new regular NHL season and count as home games for last term's champions, the Anaheim Ducks, as they migrate across eight time zones to host their local rivals from 35 miles down the highway, the Los Angeles Kings.

It's the equivalent of Manchester United opening their Premiership defence against Blackburn in San Francisco, which these days doesn't sound so outlandish given the top clubs' regular pre-season tournaments in Asia and the States. The reasoning is pretty much the same in both cases. They're looking for ways into lucrative foreign markets that have typically been resistant to the obvious charms of their sport. Even then, that the honour of the first regular season game in Europe should fall to London is still a surprise given that Scandinavia and former Soviet territories provide a sizeable proportion of the NHL's players, and therefore foreign fanbase, while we don't seem to have provided one player ever and for the most part could barely care less. The other day the Ducks paraded the legendary Stanley Cup, which was originally sold from the West End, around the capital in an open topped red bus and as one hockey scribe explained:

You don’t really realize the power of the Cup until you go away from its comfort zone. It is a celebrity even on the streets of London, where football’s FA Cup reigns supreme among the sporting populace. Everywhere we went, people pointed and stared and asked hush questions as the Cup passed by.

What he failed to lip read was that the enquiries were "Who are they and what is THAT?" Just like us though he did notice that there was plenty of other interest.

There are cameras everywhere — in the tube waiting areas, in pubs, on the streets — documenting your every move. It can be unsettling when you stop to think how pervasive the surveillance is.

And this from a man used to having a Department of Homeland Security.

Anyway, unusual though this weekend's events are, they do not constitute the first bold location decision by the NHL. The sport probably has most in common here with rugby league in that it's fiercely popular in areas of the North (and also Canada), but attempts to spread the game's appeal southwards have met with only limited success. Despite posting some record attendance figures the game is struggling for television audiences and therefore to secure its status as one of America's Big Four sports. The excitement, as convert Ian Winwood wrote in the Guardian, is very much in being at the game itself:

Live hockey can be, and often is, an experience like no other. No game loses more in the translation to television than that played by 200-pound men skating at up to 40 miles an hour, laden with body armour, chasing a disc of vulcanised rubber and using a combination of balletic skill and basic thuggery as the tools of their trade.

Those that snapped up tickets quickly back in March will be able to experience that for themselves as they pack out the 17,500 seater arena this Saturday and Sunday evening while those of us having to make do with coverage on the goggle box could do worse than make our way to a pub we recently recommended for watching Canada in the rugby union World Cup, the Maple Leaf on Maiden Lane, Covent Garden, which is likely to make up for the somewhat diminished visual spectacle in atmosphere and camaraderie as it is predicted to be packed with feverish ice hockey fans all weekend and is conveniently close to sporting apparel emporia for those vital nouveau skateiste jersey purchases.

And just in case you're thinking that fella in the picture looks strangely familiar, ice hockey's top team were founded a mere fourteen years ago by the Walt Disney Corporation as the Mighty Ducks of Anaheim, inspired not so much by the live action movie concerning the classic misfits-to-heroes rise of a youth hockey team, but more by the animated series that was inspired by that movie and featured a team of that name which consisted of wild fowl pucksters of a similar nature to those martial artist amphibious reptiles you may have encountered. The name was only altered in 2005 when Disney sold the franchise. Nobody involved seems to find any of this particularly unusual. We await the Super League debut of the FilmFair backed Warrior Wombles of Wimbledon with much anticipation.