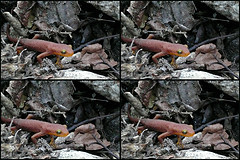 There are some very pissed newts in Stratford, as the Olympic Planning busy bees have slapped a compulsory purchase order on their current ponds to make way for a cycle track.

Actually, they shouldn’t be that pissed off, as they are to be offered a bijou new des res in an all new pond nearby replete with grub-friendly foliage and goo (and they’ll probably be given discount vouchers for the velodrome ‘an’ all).

The Great Crested Newt is Britain’s largest indigenous salamander, slithering up to 17cm in length. But his numbers are dwindling.

However, Nigel Newt is heavily protected by European law – no stop and search for this little fellow, as you need a licence even to touch him, and he seems to have more civil rights than the average Londoner – has been given no less than 6 months to object to the plans (unlike some East London residents).

Londonist is actually a bit goofy about wildlife, even the slimy and scaly varieties (oh, but no eight-legged things – we don’t do 8 legs), and we are happy that endangered species such as Nigel are getting the protection they need.

But…there is a balance in all things, and there are some worrying tales of disproportionate expense and time spent trying to re-accommodate assorted species. According to Jon Abbatt of the Agricultural Development and Advice Service (ADAS):

“Fifteen great crested newts added £315,000 to the cost of a road-widening project in North Wales and five slowworms caused a six-month delay on a house-building project after Natural England - the agency that advises the Government on nature conservation - stepped in to stop work at the site.”

Nigel is a bugger to catch, as he only comes out at night and can only be rounded up outside the breeding season. It involves an awful lot of plastic fencing and bottles. They’ve been after the Stratford Nigel for eight months.

Now builders and developers undoubtedly sting their punters every inch of the way, and so we are not unduly concerned for the extra expense that these conservation measures is costing them, but Londonist cannot help thinking that such huge sums of money and effort could be better deployed.

Anyway, we wish Nigel and his mates every happiness in their new habitat.

There, and we managed to spin this whole story without mentioning King Newt once.

Photo courtesy of jahfool’s flickr stream. There are five times as many pictures of newts on flickr as there are of Ken Livingstone. And they have a huge on-line presence. Awesome.