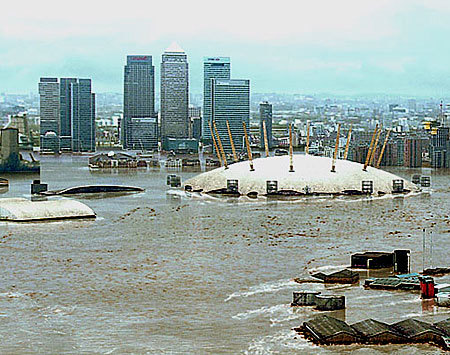 …the way that apparently a lot of people have as this photo has been doing the rounds.

And no, it is not part of this week’s ‘Touch Up London’ competition.

It is, rather, one of the publicity shots for the much touted $30 million film, FLOOD, which is due to wash up in a cinema near you from Friday. Based on a book by Richard Doyle, it has a huge wall of water charging up the Thames and swamping London, whilst Robert Carlyle and Tom Courtenay try to save us.

There’s nothing new about the idea – London has ever been susceptible to flooding. John Stow recorded that in 1236 the river was so swollen that “in the great Palace of Westminster men did row with wherries in the midst of the hall”, and in 1663 Pepys wrote:

“There was last night the greatest tide that was ever was remembered in England to have been in this River, all Whitehall having been drowned.”

But the Environment Agency is very anxious to assure London that such an extreme scenario as the film portrays is awfully unlikely (at something like 1:2000), and that the very comprehensive Thames Flood Defence system is designed to keep us all dry (unless you happen to live on an Essex mudflat).

Now some of you might deem this film a bit of a tasteless joke, what with the summer we’re having and all. Others might afford a watery smile at the commercial timing of the release – it could scarcely be more topical, and its makers must surely be laughing all the way to the river bank.

Londonist hasn’t seen it yet, but is prepared to give it a go. For all that we’re fed up with our summer in wellies, at the back of our thoughts is a tiny jingle of pride that the drama in question has agreed to unfold this side of the pond for once – a conspicuously all British disaster movie. Now there’s a thing.