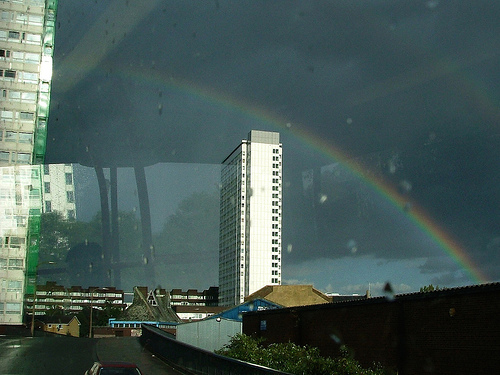 We told you about BBC show 'The Tower' earlier this week. It's all about The Pepys Estate in Deptford. Well, it seems there's been a little bit of a backlash from the residents. They're not happy. Apparently one of the residents (a retired gangster) says the show holds them in a dim light.

Apparently the show has been filming people putting needles in their arms and getting drunk. And the residents don't like it. But this, to be fair, must have been filmed somewhere on the estate in the last year of filming. But we imagine if it had been filmed for this long and there's only eight episodes, then it's possible there has been an awful lot of creative editing going on. If not, just picking and choosing the worst bits is enough to make this estate see red.

As Harry Hayward says "We're not the best in the world around here but we're not as bad as all that." This coming from a retired gangster.

But Londonist doesn't want to be unfair. Mr Hayward is a trustee of the elderly residents group and he says they're too scared to go outside. Which is understandable if there's allegedly drug addicts on every corner. Even if this is the case, everyone has the right to live in their home without feeling like victims and made to feel scared.

It seems that while the estate may well have it's problems, but some of the residents are probably hoping that the BBC stick to filming Eastenders next time.

Image of The Tower itself from Nicobobinus' flickr stream.

The Tower is on BBC1 on Monday evenings. Times may vary.