Londonist doesn't like to blow it's own trumpet, but by golly we throw a darn good pub quiz. No less than 11 teams (comprising 62.5 people) were pitted against each other in a battle of London knowledge that could, frankly, have rivalled Going for Gold. Maybe even the Krypton Factor.

Congratulations to the winning team, who went by the less-than-tasteful name 'The Marchioness'. There they are, to the right, waving their arms like gibbons.

Our favourite round was the biscuit questions, where famous landmarks were replaced by the likes of custard creams and Jammy Dodgers. Sounds easy? Obviously you weren't there. 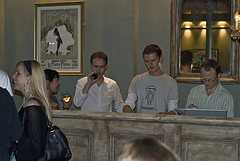 Those scores in full:

Luckily for you we'll do it again soon. It'll be bigger and better and no doubt even harder. Possibly with even more wonderful prizes and obfuscating sweatmeats. But if you can't wait until then (because to be honest, we can't) then get up to The Boogaloo in Highgate on Wednesday 24th July. Our wonderfully cheeky hosts Lee-Jay Bannister and Simon Williams are hosting their regular film quiz: You're Gonna Need A Bigger Boat. (Yes, the name is a quote from a famous film.) They're clever these folk. There's a big screen with the questions on, so you dont spend all night saying 'I didn't hear you' and getting them to repeat themselves. You even get a beer break.

We'll be there, and you can find out if we know anything about films as well as useless London trivia and buildings hiding behind pink wafers. We're excited already.

Images of the winners and our rather dashing hosts from Simon Rigglesworth on the londonist flickr group.

The next 'You're Gonna Need A Bigger Boat Film Quiz' is at The Boogaloo. Nearest tube is Highgate. The quiz starts at 8.30, but you'll have to get there much earlier to get a good spot. We'll keep you posted of any new Londonist events.