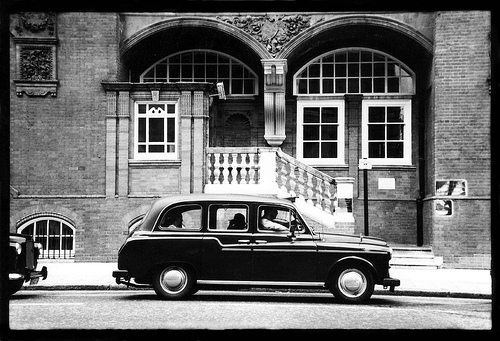 Well, ish. It's been announced that drivers of three thousand cabs now have the choice to use a new biofuel fuel mix. Each driver that opts for it will get their mitts on a nice green sticker to proudly stick to their windscreen.

A handful of cabs parked next to City Hall this morning for a photo opportunity to celebrate. Or it might have been to chauffeur certain London Assembly Members around, we're not sure.

So far, so nice. It's not going to have a massive impact, as the fuel is a 30% biofuel blend - the best it will do is cut CO2 emissions by 7%. But it's a step in the right direction. Personally, we only use black cabs after over-doing it at Londonist get-togethers in town, the rest of the time we prefer to use buses and our trusty bicycle as more affordable options - afterall Ken's already got some of his buses working on hydrogen cells and allsorts, and we use the money saved to make sure we over-do it again, next time.

One handy side-effect of the fuel is that cabs will be able to go 10% further on a full tank. So at night maybe they'll be able to take us to Elephant and Castle or perhaps even further South, now?