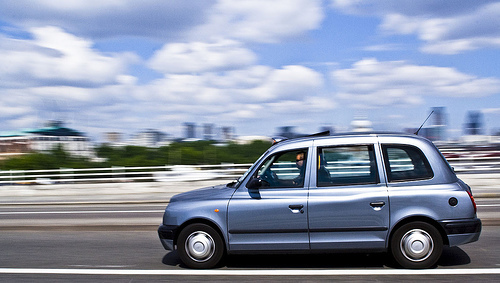 After an amazing weekend for the capital, we were wondering how long it would be for some good old fashioned political bitching to start.

The answer seems to be "about 8 seconds" as Mayor Ken Livingstone launched an attack on a "staggering" £10,000 taxi bill put in for last year by one single London Assembly Member, Brian Coleman. Coleman chaired the assembly and claimed the costs were not for taxis per se, but car hire for ceremonial duties.

How's this for some classic Livingstone: "Rather than swanning around London in a chauffeur-driven car, Mr Coleman should try cutting down on the receptions, lunches and dinners and set an example to Londoners by using buses, the tube, or even walking occasionally." This sounds like one of his off-the-cuff remarks at a public meeting, normally causing his press office to scarper around to sort out the PR mess - but, no! this is quoted from the Mayor's Office own full-blown press-release.

London's taxis are beginning to reduce their emissions, and if this progress is accelerated in the same manner as New York, then at least the carbon footprint of all this might be mitigated, if not the impact on the taxpayer.

While we enjoy the deliciousness of knowing that it was this Assembly Member who chaired sessions that examined the motivations behing the Mayor's international travel to Cuba and elsewhere, we are also keenly aware of some of the Mayor's own controversial luxury travel choices within the UK. £260 cab from Blackpool anyone?

It's also great to see the Assembly itself scrutinised rather than just doing the scrutinising of everyone else. Next year, all posts on the Assembly are up for grabs. Londoners might well be interested to know why certain Assembly Members have used taxis rather than the All Zone Travelcards that they get handed for free. Check what your Assembly Member spends on cabs here.