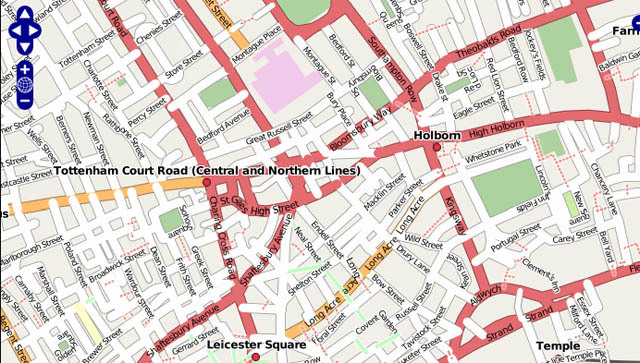 OpenStreetMap is a map of the world created, like all the best things, by amateur enthusiasts. Farting in the general direction of professional mappers, these collaborative cartographers prowl the streets collecting GPS data and building up their wiki-based map. We caught up with charter-in-chief Steve Coast, to find out why they're bothering.

So what's it all about?

OpenStreetMap exists because map data is very expensive in the UK. It's owned by a monopoly provider - the Ordnance Survey - who operate in a quasi commercial/public way. Even when you get your hands on that data you can't do much with it due to lots of license restrictions. In some places map data is public domain and in some it doesn't exist at all. OpenStreetMap lets anyone add to and edit the map with whatever you find interesting. In the UK this means pubs!

Day 1 of the project, you have a blank canvas and 197,000,000 square miles of the Earth’s surface still to map. Where the hell do you start?

With the road I live on. I've lived around Regents Park a fair bit so that was my focus. The idea was if I could prove it worked for me then it should work for you, too. Then we could join our maps up...and with others and map the planet. It's taking time, but we're up to 6,300 users now across the world.

Which countries have the most proactive mappers in the project?

The UK followed by Germany, Netherlands and Denmark. I've just been to Spain and it's beginning to take off there.

Is there a stereotypical open mapper? Does the project tend to attract a certain type of person?

It's funny but no - we have a very wide range of people involved. Initially it was technically minded and those pissed off about the Ordnance Survey but these days we have everyone from walkers to historians.

What if we don’t have a GPS device? Is there any way we can get involved?

We run regular mapping parties (there's one this weekend in Southampton and one in June in SW London) where no experience is required. Turn up, we'll give you a GPS and off you go. Followed by pubbage of course and the warm glow in your tummy of having helped OpenStreetMap map a small part of the world. We're always looking for people to write code, help organise the wiki or many other non-mapping things. The best way to start out is to get on the mailing list and suggest stuff for improvement.

Is there a real ‘community spirit’ around what you’re doing?

There’s a pretty strong community, be it on mailing lists, at mapping parties or at our upcoming conference. Unlike fixing things on wikipedia, openstreetmap is a more social activity so it naturally lends itself to self-organisation. It's worked pretty well.

Have you had any official communications with proper mapping companies? What do they think about it?

Definitely, I've even spoken at the Ordnance Survey! Some people 'get it' and some don't. Multimap are pretty on the ball and sponsor us but traditional cartographers can recoil in horror at letting ordinary people edit a map. Even some high tech mapping companies are hostile but it's more out of fear than anything - how do you compete when we're giving the data away for free?

And the London questions...

It's grimy and it changes owners more frequently than a copy of the London Lite but the Jeremey Bentham on University Street at the top of Tottenham Court Road will always be home.

Do you have a favourite London secret (either a place or a bit of trivia)?

When I was a kid President Clinton came to the UK and stayed at the US ambassadors place in Regents Park. I was getting ready for school and my brother and I went up on the roof to watch his chopper fly over when one of the escort choppers took an interest in us. We waved but they pointed a big gun out the side of the thing at us so we went indoors. On the way to school one of the choppers followed me, I swear.

Worst thing about this city?

Favourite thing about the city?

The Comedy Store. Late night opening when even the comics have had a few.

No but I did throw up orange juice all over a platform at Kings Cross once. I held it in all the way from Cambridge. It bubbled.