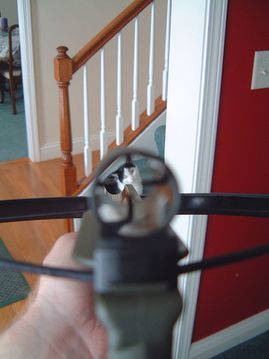 Someone’s out to get Pepsi. Someone with a crossbow.

It’s a targeted campaign. Pepsi, of Egham, has been shot twice in the last three months with identical crossbow bolts. This cannot be mere coincidence. That’s one lucky cat and one ardent cat hater with an archery fetish.

Earlier this month Pepsi returned home noticeably out of sorts. Darleen Matthews, 38, a member of Pepsi's family, said: "When he wandered in he was really quiet and wasn't himself at all. Then to our horror we noticed he had an arrow sticking out of him.”

"The vet said it just missed his heart and punctured his lung and caused internal bleeding."

The previous attack resulted in Pepsi bringing home an arrow through his neck. The perpetrator has clearly been working on their aim.

RSPCA Inspector David Johnson has vowed to track down the sick individual so intent on perforating Pepsi so if you know who the cat crossbow criminal is then please, please call the RSPCA's Cruelty Line on 0870 5555 999, before it’s too late.

Image courtesy of jaboobie's Flickrstream. We're giving jaboobie the benefit of the doubt that he's not our man.