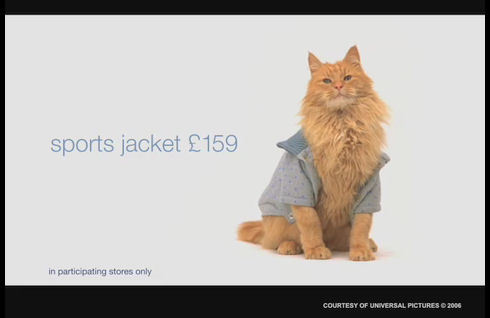 We loved a lot of things about Children of Men (Michael Caine mostly), but also appreciated the little touches that were just futuristic enough to let us know that this wasn't the here and now. Yet it was certainly a London firmly grounded in today's culture and politics as seen through things like the LCD screened bus advertising and TV spots. Just glimpsed long enough these little snippets of media helped to create the feel of a country in turmoil that seemed just around the next corner.

Now you can see a showreel of the suite that Foreign Office put together for the movie (lots of other great stuff on the site - have a poke around).

The adverts for pampered cats and dogs may seem to offer a little comic relief in a dark movie, but it also makes a lot of sense plotwise. That in a society with no children a lot of misdirected love would fall onto pets. It also taps into that great cliché about what a nation of animal lovers we are, worrying over the comfort of pets while people are being rounded up in cages.

As for the bleak news reports and anti terrorism propaganda... that's sadly all too familiar.

Thankfully in reality we have lots of children to spare. But just in case we're fingerprinting them all anyway.