By sizemore Last edited 192 months ago
sizemore I Robot 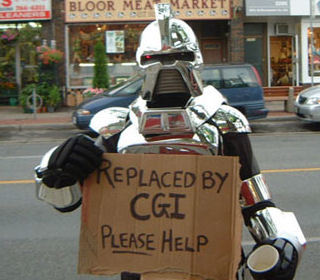 You know how it is, as soon as the boss is away the staff get to do all the real work. In this case that means worrying about equal rights for robots:

Robots might one day be smart enough to demand emancipation from their human owners, raising the prospects they'll have to be treated as citizens, according to a speculative paper released by the British government. Among the warnings: a "monumental shift" could occur if robots were developed to the point where they could reproduce, improve or think for themselves. "Correctly managed, there is a very real possibility for increased labor output and greater intelligence to be provided by robots that will ultimate lead to greater human prosperity and an improvement of the human condition," it said. However, it warned that robots could sue for their rights if these were denied to them.

Steady on. Maybe the government should get the hang of how to protect the rights of the flesh and blood models before moving on to getting sued by humanity 2.0.

We have to admit to being a bit jealous of the people who work at the U.K. Office of Science and Innovation's Horizon Scanning Center. They get to tell the government which of their favourite sci fi movies pose the biggest threat. If we worked there all that ID card crap would be binned in favour of more SAS on the streets to protect us from naked chick space vampires.