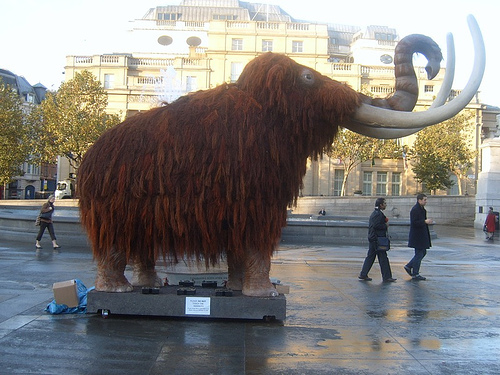 Londonist was up bright and early yesterday to see the mammoth arrive in Trafalgar Square. A year ago and we would have been quite charmed by the little furry fellow, but that was before the arrival of The Sultan's Elephant. In fact our first question of the day, who would win in a fight between... died on our lips. It was quite obvious that The Sultan's Elephant would quite happily pick up a life sized mammoth and fling it towards Downing Street without breaking much of a sweat.

What the mammoth did have over the mechanical marvel though was a familiarity with the streets. Woolly mammoths are no stranger to Trafalgar Square. In 1840 during excavations near the newly constructed National Gallery a woolly mammoth was unearthed. That mammoth had been killed by man (weapons were found with the skeleton), but yesterday's mammoth brought a friend along in the form of Professor Chris Stringer: More photos and mammoth facts after the jump

Prof. Stringer was there to remind us about climate change and what better way than drag along a life size woolly mammoth to help warn against the dangers of being a Clarkson.

Within the next 50 years we may have to adjust not only to baking summers from global warming but also to mortally freezing winters... the British way of life and Homo britannicus could go the same way as Neanderthal Man and the woolly mammoth.

We also learned that mammoths had two coats - short furry ones and then a longer rugged winter one - and that teenage mammoth teeth are huge: We also got to look at a neolithic spear head and some actual mammoth hair. We asked Prof. Stringer whether it would be possible to pull a Jurassic Park and recreate a mammoth and he very candidly talked about preserved mammoth sperm and the possibility of getting an Indian elephant up the duff with it. Not that he could condone such a thing as a mammoth elephant hybrid would have no real natural habitat and end up as nothing more than a curiousity.

Much better to have one on wheels.