Poor Tox just can’t help himself. New ‘work’ by the serial wall-spammer, in his regenerated Tox06 guise, has been sighted in Brixton and on the sidings outside St Pancras station.

To recap, Tox is the capital’s most infamous tagger. During his nocturnal adventures, he’s sprayed hundreds of walls, signal boxes and trains over much of London’s rail network. Despite arrest in 2004, the spraying spree continued throughout last year, and the Tox05 mark is just as common as the earlier vintages. 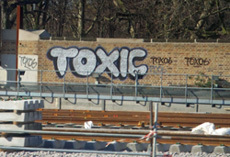 The young ragamuffin is so buried in ASBOs that he’s barely entitled to leave his bedroom without risking arrest. But still he persists, and his notoriety has only increased. The Tox04 tag could be seen framed in the window of a mangled July 7 carriage, and he’s gone and gotten himself a Wikipedia entry.

Our post last year about his Tox05 re-emergence received a near-unprecedented number of comments. Here are some of the highlights:

Erm, thanks, but we might pass on that one…

For the new year, Tox has decided to expand his oeuvre, broadening the palette to include multicolour tags and king-size ‘Toxic’ logos (see pictures). But once again we want your help. If you sight a Tox06, let us know. It’s a bit like Bill Oddie’s Spring Watch, only with more spray paint and less beard.