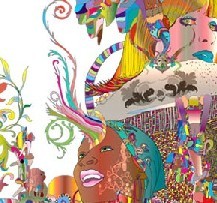 The term Brazilian conjures rather limited images for us over here: a certain type of bikini wax, football, type of nut, samba... but there's more, so much more. The Barbican is hosting a mega three month festival, presenting and celebrating Tropicalia , the movement that shaped Brazilian style, sound and art from the late 1960s onwards. The breif guide to Tropicalia from the introduction to the programme is as follows:

The Tropicália movement was a passionate and intelligently articulated response to military dictatorship and the ultimate counter-cultural statement - a true revolution that re-defined Brazilian arts and re-shaped Brazilian identity. It was to be a brief explosion of cultural transformation and upheaval, spanning a period of no more than five years, from 1967 to 1972. Some would say that it ended only a year after it began, with Caetano Veloso and Gilberto Gil’s arrest in December 1968. What is clear is that Tropicália changed Brazil forever.

In the programme, the main exhibition of over 250 items ranging from album covers to fashion, documentaries to theatre sets and TV explores not only the movement itself but also its relation to the urban and political surroundings of late 1960s Brazil and the present day. There are also contributions and collections from contemporary artists who continue to be influenced by the movement. Accompanying talks, films and live music will feature throughout the three month festival.

Keep an eye out for the two performances by AfroReggae, a band who mix the beat of the favela, the shanty-town sound with the exotic sounding influences of Tropicalismo, mangue beat, Paulista rap, samba-reggae, capoeira and carioca funk. Workshops include samba sessions that allow participants to use masks and costumes from the main exhibition - open to children and adults. Films are still being confirmed for the programme but what's lined up already is looking good.

For the latest information on Tropicalia and to book tickets, please go to the dedicated Tropicalia site here.