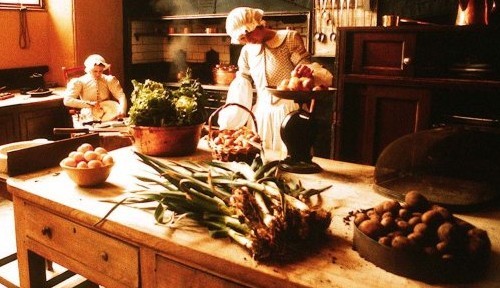 First of all, it is important to know How to Order Your Meals and what is expected of you and your staff at each meal time. If you are the Lady of the House, then these matters are your main concern and we urge you to continue reading for the sake of your family and those who work for you. If you are the Master of the House, then you may stop reading and go off on your horse to shoot something small and furry. If you are the kitchen maid, scullery maid, butler, first / second / third footman, house maid or Lady's maid, then please turn off the computer and GO BACK TO WORK BEFORE YOU GET CAUGHT, YOU LAZY, WICKED PEOPLE.

Your maid will bring tea and toast to your bedroom to enjoy before dressing for the main breakfast which is served approximately an hour and a half later.

Help yourself from the dishes set on the sideboard. The butler (addressed by surname) and footman (it is not necessary to learn the name of your footmen) will serve you tea and coffee.

Three course meal for the whole family. Morning dress or outerwear is acceptable for this meal. The women must enter in pair followed by the men.

Tea is served between lunch and dinner and is either taken away from home as part of an afternoon call on friends and acquaintances or hosted by yourself for those visiting you. In either case, expect bread and butter, tea bread, cakes and biscuits to be served.

Some Recomended recipes from Girl's Own Paper:

The following recipes, some of which are very old, and have been in the possession of the writer's family for a number of years, have been copied out in the hope that they may prove both new and useful to some of the readers of the Girl's Own Paper. It is evident that from the quantity of barm or brewer's yeast used that German yeast and baking powder were not then known. The "Funeral Biscuits", though not now in use for their original purpose, are very good, and the writer was assured by a very old lady that no funeral was, at one time, considered complete without them.

The quantities used in these recipes can, of course, be reduced at discretion.

Make a short crust, and roll it thickly; take about one pound of veal, and an equal quantity of bacon and beef suet. Shred them all finely, season with pepper and salt and sweet herbs. Put them into a stewpan, and keep turning about, with a few mushrooms chopped small, for eight or ten minutes. Then fill the patties, and cover them with a crust. Colour them with the yolk of an egg and bake them.

Slice very thinly a penny loaf, then pour on a pint of boiling cream, and let it stand two hours. Then take eight eggs, half a pound of butter, and a nutmeg grated; beat them well together, and mix them into the cream and bread, with half a pound of currants well washed and dried, and a spoonful of white wine or brandy. Bake in patty-pans lined with puff paste.

Scald some spinach in boiling water and then drain it quite dry. Chop it, and stew it in some butter and cream, with a very little salt, some sugar, some bits of citron, and a very little orange-flower water. Put it into a good puff paste, and bake in a moderate oven.

Take three pounds of flour, five ounces of sugar, six ounces of butter rubbed into the flour, and a teacupful of new barm, set them to rise with milk and water, then mix them and let them stand half an hour, then make them up, roll thin, and lay on tins to rise, then bake in a hot oven.

Take sixteen eggs, three pounds of flour, three pounds of lump sugar grated, mix, and form into forty-eight fingers. (N.B. - The writer would suggest experimenting with half or one-fourth of the quantity, and using castor sugar, in lieu of the tedious process of grating lump.)

Take three pounds of sugar, half a pound of butter, and a quarter of a pound of sugar rubbed well together; take a little clove pepper and carraway seeds, one pound of currants, a teacupful of new barm set to rise half an hour, then mix it up, and let it stand until risen, then make into buns.

Put a blade of mace and a quartered nutmeg into a quart of cream; boil it, then strain it, and add it to some whole rice boiled, and a little brandy. Sweeten to taste, and stir over the fire until it thickens, then serve it up in cups or in a dish. To be eaten either hot or cold.

With special thanks to Betty Soper