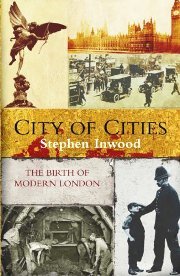 Oh, top marks, Inwood. A new tome about the capital that (a) doesn’t have London in the title and (b) bears no sign of a foreword by Ackroyd/Sinclair. Something of a novelty.

Inwood has tackled the capital before. His masterful 2000 work ‘A History of London’ was largely and sadly overlooked, thanks to the ill-fortune of publishing in the same year as Peter Ackroyd’s more sexy Biography.

City of Cities covers the 30 years before WWI, in which London slowly shook off its restrictive Victorian attitudes and learned to party like, erm, an Edwardian. Momentous changes in these years forever altered our way of life: for example, transport (bye bye horses, hello motor vehicles, deep-level tubes, bicycles); technology (electric lighting, telecommunications); and, most saliently, social change (clearance of ‘rookeries’, old-age pensions, rise of the suburbs, the discovery that women could actually do things other than cook and have babies).

This was the London of Wilde, Wells, Shaw and Yeats. But also, for many, an era of great poverty and unemployment. A Jekyll & Hyde metropolis of learned and fashionable statesmen, writers, poets and engineers, nestling up against the shadowy underworld that spawned the Ripper.

It’s a story which the publishers would have us believe, perhaps stretching things a little, ‘has never been told before’. And there are some real nuggets in here that we’ve certainly never been told before. For example, in the 1890s, London’s horses deposited more than half a million tons of shit per year on the capital’s roads. So the introduction of the motor car actually improved the health of Londoners, as evinced by a sharp drop in faeces-associated diseases in the early 20th Century.

While issues such as equine pollution have disappeared, some parallels with modern London are, at times, striking. (They even had their own version of the London Eye, over in Earls Court.) Taking just a couple of the key issues facing our city today:

Olympics: We have seven years to get it right. Back in 1908, there was just a year to design and build the whole shebang. London stepped in after the Italians announced they were broke. Not only did Edwardian London rise to the challenge, it built the largest stadium the world had ever seen and saved the early Olympic organisation from collapse. Now that’s a can-do attitude.

Terrorism: Not a new thing, by any means. Even the IRA were just treading old ground. Their forerunners, the Fenians, set off bombs almost at leisure on the early Tube network, injuring many. The Edwardian city also had to contend with militant suffragettes and the occasional foreign ‘anarchist’.

Inwood noticeably avoids making such easy comparisons with modern issues, leaving it up to the reader to infer them. This makes for an engaging read, and many of the 22 chapters fly by. At other times, the pace can be much slower, such as during the necessary but uninspiring section about the changes to London’s governance. Overall, though, the book is very readable and will appeal particularly to those who already possess a fair knowledge of the city’s history.

The 538-pages are rounded off with over 40 (mostly) unfamiliar photographs, several maps and an exhaustive references and bibliography section (again, not a whiff of an Ackroyd – hooray!).