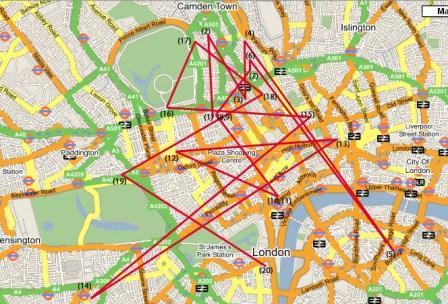 And, by God, did he get around. Stalking Paolozzi was a piece of cake in comparison. The map above is our stab at showing all Dickens’ London addresses. But sources conflict, and there’s bound to be a few missing. During his childhood, Dickens hopped from home to home as his father tried to dodge the debt collectors. Following in his footsteps, we similarly hopped from one location to the next, though largely on account of blisters.

We've managed to get photos of about half of them (click through below), but many are long gone and difficult to trace. Plus, there's no way we're going to take a camera into Somers Town. Dates indicate when Dickens moved into a particular address.

The Times History of London (1999 edition) also lists 16 Hyde Park Gate (1862) and 57 Gloucester Place (1965) as residences, though we can find no further information on these. The former was the birthplace of Virginia Woolf, and is now the Estonian Embassy, so it looks like the Times are a little mixed up. Unless you know better.

How’s our stalking? Think we’ve missed something? And who would you like us to stalk next? Let us know in the comments.