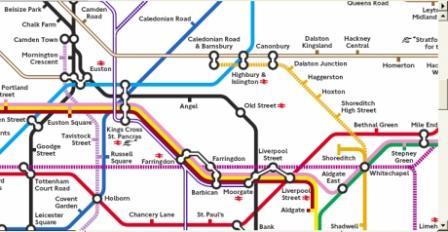 While we’re on the theme of close liaisons on the Underground, we should probably mention a story from the Beeb that suggests things are going to get a whole lot closer. A new study concludes that our already-bulging Tube and train carriages will have to accommodate a 24% increase in commuter journeys over the next decade.

Fortunately, the transport authorities have a shed-full of plans for improving the network. We thought it was about time for a handy roundup of all the main projects. So, all aboard...

What is it? One helluva big project, estimated to cost £10-16 billion. A new 10-mile deep-level tunnel will be built between Paddington and Whitechapel, with overland routes through to Heathrow, deepest Essex and darkest Kent. Trains will also stop at Bond Street, Tottenham Court Road, Farringdon, Liverpool Street, Isle of dogs and many other places.

Current Status? Although backed by the Government, the project is still mired in funding difficulties. If you fancy some light reading, check out the Crossrail Bill, which has passed two hearings in the House of Commons and has now been given to a select committee. This administrative work should be finished next year.

Prospects? They’ve done a good job of making everyone Cross, now they just need to work on the Rail bit. This one’s been dragging on for 15 years already! If it goes ahead, it will be the most costly engineering project in the UK, ever. Virtually everyone wants it, but who’s going to pay for it? Well, it looks like some kind of public-private partnership deal will be worked out. Those in the know are fairly confident the link will go ahead, with work on Line 1 beginning in late 2007 for completion by 2013. The prospects for a Chelsea to Kings Cross Line 2 are less certain.

What is it? Fairly self-explanatory. The phased extensions should reach to Highbury & Islington in the North; Clapham and West Croydon in the South. Much of the extension will use existing infrastructure, though new stations will be built at Bishopsgate, Hoxton, Haggerston, Dalston and Surrey Canal Road. (In addition, Shoreditch will be closed, and reopened on another site.)

Current Status? Construction should have started four years ago, but clashes over the fate of some Grade-I listed brickwork in Bishopsgate Goods Yard caused delays. This matter has now been cleared by the courts, while the physical matter has been cleared by the contractors. Main site works are due to begin one year from now, with the line being closed for 18 months from late 2008 to help the construction effort. The extended line is expected to open in 2010.

Prospects? As Tube work goes, this one should be relatively straightforward. Little tunnelling work is required, and most of the tracks already exist. With the Olympic Games secured, this one is now certain to go ahead.

What is it? New terminus for the Eurostar at St Pancras, with stations at Stratford and Ebbsfleet. Commuter services will also use the new lines, meaning a trip out to Bluewater will now only take about 15 minutes.

Current Status? Despite killing two workers and undermining several houses, this one’s progressing rather well. The main tunnel under North East London is essentially complete, and the associated station redesigns at St Pancras and Kings Cross are making good progress. The promise of an international rail station at Stratford was a cornerstone of our successful Olympic bid.

Prospects? All signs point to this new rail link opening as planned in 2007.

Crossriver Tram Project: a new tramlink from Camden through to Peckham and Brixton, via Euston, Holborn and Waterloo (view route here). Ken wants this built by 2013, with construction beginning in 2008. The scheme is currently undergoing a detailed design review.

West London Trams: Another new route, this time between Shepherds Bush and Uxbridge via Ealing, Acton and Southall (view route here). A recent public enquiry raised several concerns, which will now be considered further. Pending this enquiry, construction should begin in 2009 with completion by 2013.

Thameslink 2000: A plan to upgrade many stations, increase throughput, and expand to areas such as Peterborough and Cambridge. Seems to be cursed. The plans have been through countless studies, inquiries and consultations, to the point where the project name has become woefully dated. It's currently in yet another round of inquiry, and it'll be around Christmas time when we hear the result. Hmmmph!

In addition, plans are well on the way to extend the DLR to City Airport, Woolwich Arsenal, and elsewhere; and new routes are to be added to the Croydon Tramlink.

If you want to learn more, the informative AlwaysTouchOut site has details of 110 projects (some more bluesky than others) that are currently being considered. Jubilee Line to Thamesmead? Bakerloo to Camberwell?