We like modern Italians so very much, what with their rich foods and fine wines, innate sense of style, glamorous crime syndicates and all that dolce vita stuff. But we love their Roman forbears, who came, saw, conquered and, most importantly for us, founded this great city we live in.

So, with the BBC about to screen its raunchy new blockbuster series ‘Rome’, we went in search of Londinium, which Caesar’s geezers laid down nearly 2000 years ago.

AD 43. Four legions plus auxiliaries, equivalent to a decent home crowd at Highbury, poured into Kent and Essex on the orders of Emperor Claudius. The southern softies of Britain were soon cowed, but what to do about the big, blue logistical problem called the Thames? Moving armies across this natural barrier was essential for controlling the indigenous tribes, so a place had to be found where the river could be bridged or forded.

A perfect narrowing was found, just meters from modern London Bridge, where a simple wooden crossing was built. To the North, the land rose appealingly to form the defensible hills of Cornhill and Ludgate. The River Walbrook flowed through the valley, and, with the nearby River Fleet, provided ample fresh water. And thus, on this idyllic spot, was London born.

Or stillborn. Just a handful of years later, Boudicca (or Boadicea, as she was known before a recent rebranding) proved that she had far more balls than the legions, and torched the nascent metropolis to the ground – the only time our city has been completely and utterly destroyed. But Londinium was quick to recover, and a less-flammable town was built that would endure for 400 years (map). The glory days finally ended when the Roman armies made their arrivedercis, and left to tackle more pressing matters on the continent. After a rapid decline, the great mured city became virtually uninhabited, until medieval times.

Click on the Via Hyperlinkium and join us after the jump, as we go in search of Roman remains… 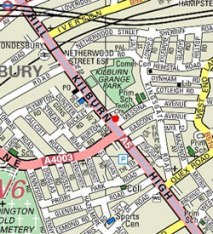 The original street plan of Londinium is largely erased, but many of the major routes out of the city are still with us today. If you look at the front pages of your A-Z, you’ll notice that several roads have something of the Euclidean about them. See that long, white line heading up towards page 44, and on to Cricklewood? That’s Watling Street, or Kilburn High Road to you and me. Maida Vale, Edgware Road, Oxford Street and Holborn also follow this ancient way. A centurion sat atop a number 98 bus, gazing down on the barbarian hordes of Brondesbury, would feel right at home. They were quite fond of their oysters too.

The Old Kent Road really is ‘old’. It follows the southern stretch of Watling Street and, with a bit of creative navigation, still leads down to Canterbury. Similarly, the cobbles of Ermine Street lie beneath Bishopsgate-Kingsland Road-Stoke Newington Road. Finally, the Romans were never ones to shy away from going South of the river, and paved Stane Street, which led to Chichester. Today, the route can be followed along Borough High Street, Kennington Park Road and Camden Road.

After all that walking, you might like to sit down. But we haven’t finished with you yet. Go see yer genuine Roman paving in situ, by visiting the crypt of St Brides off Fleet Street. Tucked away in a dark corner is a preserved pavement, which can only be viewed, disappointingly, by means of an overhanging mirror. Still, it’s always good to reflect upon old ways.

Although the Roman wall went up around 1800 years ago, it still has an enormous influence on modern London. The three-mile perimeter roughly defines the boundaries of The City, and the ancient gates are reflected in our medieval street names (Ludgate, Aldgate, Newgate et al.). Sadly, much of the wall is vanished or buried, and what can be seen is mostly a later addition. However, fragments remain.

A snoop around Tower Hill reveals an impressive haul of Roman paraphernalia. As well as a big ol’ hunk of wall, you’ll find a mysterious bronze statue of the not-so-hunkish Trajan. Nearby, a replica tablet commemorates Julius Classicianus, an overachieving tax collector. Big deal? Well, yes. The inscription (or at least the original in the British Museum) is the earliest example of written language to be found in Britain.

Back to the walls, but staying in the Tower precincts, take a look in the courtyard of the Grange City Hotel on Coopers Row. Here, for our money, stands the most impressive section of wall, if only because it is hidden from casual discovery. The Roman base can be distinguished from its Medieval successor by the inclusion of distinctive red tiles, which are also clearly visible in the Tower Hill fragment.

Take a walk along the street known as Roman Wall. It does exactly what it says on the sign. Here, numerous fragments of wall can be found, including several sections from the earlier Roman fort.

If you know where to look, further fortifications can be spotted in the most unlikely of places: corporate cellars; school basements; Old Bailey dungeons; even an underground car park. If you want to learn more, a series of fading blue plaques will guide you round much of the route. Or so the theory goes. Half seem to be missing, and one was apparently blown up by the IRA. We’d recommend taking the Time Out Book of London Walks, Volume 2, and following the direction of Rick Jones. 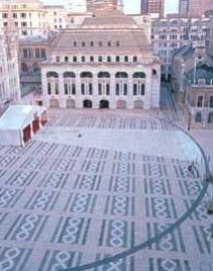 Walking through Guildhall yard, you would be forgiven for completely missing the circle of black tiles that sweeps across the flagstone courtyard. This is not just idle decoration, but demarcates the old Roman amphitheatre. This sporting and gladiatorial arena could seat 11 000 people – equivalent to a respectable home crowd for Millwall. The remains were discovered in 1988 (sorry, MCMLXXXVIII) and are now on display below Guildhall Art Gallery.

Surprisingly few Londoners will know about our first great landmark: the Roman Basilica. This centre of business was the largest such structure North of the Alps, and compared in size to modern St Pauls. The remains lie beneath Leadenhall and Cornhill and were well documented during construction of the Victorian marketplace. Few remnants are on public display, but a remarkable survivor can be found in hairdressers Nicholson and Griffin’s. As described in Stephen Smith’s Underground London:

Sure enough, over the arch of the staircase, a sign advertised: ‘Ten Hairdressing positions and shoeshine. Plus Ancient Monument Downstairs.’

Other basilica souvenirs are hard to come by, but we’d recommend visiting the fine Bacchanalian mosaic and other artefacts, on display at the British Museum.

Every time there’s a major dig in London, Roman remains are sure to turn up (good example). Elsewhere in the city, bath houses, storehouses, palaces and wharves are well documented. Lower Thames Street, in particular, has been a generous source of discovery. In ancient times, the area would have formed the northern bank of the Thames, and was thus a popular site for important buildings. A well-preserved bath house has been excavated underneath 100 Lower Thames Street, but is sadly not open to the public.

One major find that IS open to us plebs is the Temple of Mithras. This building was excavated in Walbrook after WWII, but was moved to its present site on Queen Victoria Street. Iain Sinclair is never very happy when people meddle with his psychogeography:

It looks like an unfilled paddling pool, a parking space. Roofless, exposed to the gaze of the office block, it is a shamed structure, an approximation.

The original site is now a wine bar. That’s Dionysus, you philistines! 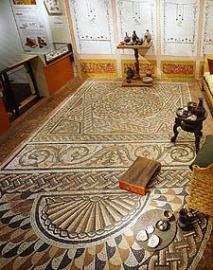 So, you might have concluded from the above that there are very few remnants of Londinium. Most of what remains is hidden away in private basements. However, many impressive finds can be viewed, free of charge, at the Museum of London and the British Museum. (Judging by the number of coins, pots and everyday items on display, our Roman conquerors were a careless bunch.) But if you only track down one exhibit, make sure it’s the so-called Bucklersbury pavement at the Museum of London. This fine mosaic has been re-set to form the floor of a reconstructed Roman room and is the highlight of the Roman gallery.

For all their academic worth, stones and sherds and tiles and tesserae give a somewhat lifeless impression of those long forgotten times. But don’t let all the sauce and intrigue of the BBC’s forthcoming ‘Rome’ distract you from the genuine article. If you want to see how carnal the Romans really could behave when they put their filthy minds to it, check out case 12a, Room 70, the British Museum. It’s enough to make Operation Ore blush.