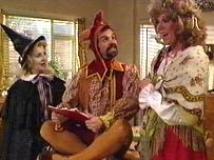 Remember Rentaghost? That’s right, the kids show from the early ‘80s, in which spooks and ghouls and freaks and fools were available for hire, and proceeded to act very camply. Perhaps electronic artist/architect/handyman Usman Haque has a 21st Century version of the service in mind, having found a way to artificially give you the heebie-jeebies. As highlighted on Boing Boing, he’s requesting volunteers from the London area to take part in a simulated spook-out.

Parapsychologists (if they actually exist – where’s the photographic evidence?) often attribute ghostly goings-on to physical phenomena, such as variations in temperature, humidity and electromagnetic fields. Haque now intends to test this by creating a ‘haunted space’ and documenting people’s reactions. By tweaking the conditions, and using suitable controls, he’ll check if we really can sense the things we’re not supposed to be able to.

Haque’s work taps into the electromagnetic world we all experience every day, yet take for granted. How often do we consider what’s really going on when we use the remote to flick through channels, or blast our food in the microwave? Visible light is the only part of the electromagnetic spectrum we’re supposed to be able to sense. But if you remember back to your school physics lessons, this just forms one tiny part of the spectrum. What if we could see UV, feel radio waves and appreciate the beauties of microwaves? Says Haque:

The electromagnetic environment is a physical space, but it's beyond our tangible sensing. Technology like mobile phones are making us more aware of it, but we have no idea how it looks or sounds.

Last year, Haque released a giant raft of helium balloons above the National Maritime Museum, Greenwich during a lunar eclipse. The so-called ‘Sky Ear’ contained a Carphone Warehouse-worth of mobile phones wired up to a mash of LEDs and EM sensors. The LEDs flashed and fluctuated in response to changes in the electromagnetic environment, and people were encouraged to call the mobiles to hear the ‘sferics’ and ‘whistlers’ of what he calls the ‘hertzian topography’.

His new work looks at the interface between technology and the paranormal, and at the rate Haque seems to coin words, is likely to become known as paratechnormalgy. If you fancy going along to his ‘lab’ in Finsbury Park to have the willies put up you, follow the instructions here.