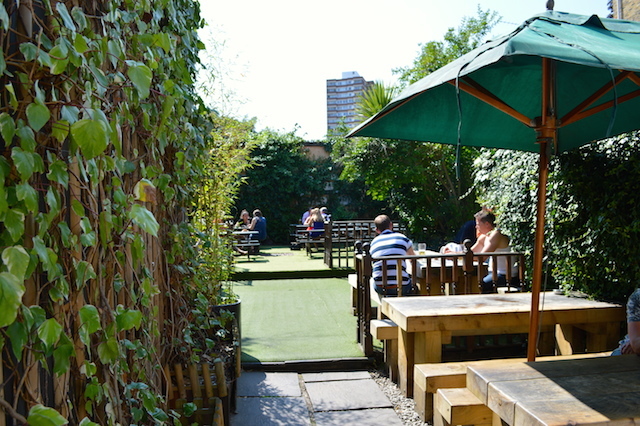 This pub was chosen editorially by Londonist for inclusion.

The increasingly popular Bermondsey Street needs a good pub, and it finds it in The Woolpack. Unassuming from the outside, the independent pub opens into something of a Bobby Dazzler once you step inside, with vintage tiling, a spiral staircase and curvy banquette seating adding a touch of class. The pub's chief attraction, though, is the ivy-strewn beer garden out back, which was bustling even when we visited during mid-afternoon on a week day (plenty of freelancers and creative types round here, you see). The beer choice is small but novel, ditto the wine list, but there's also a selection of tempting cocktails at a very reasonable £7. We haven't tried the food, which the pub is at pains to point out is all locally sourced, but it seems to be mostly of the burgers and hotdogs variety, with early opening for breakfasts.