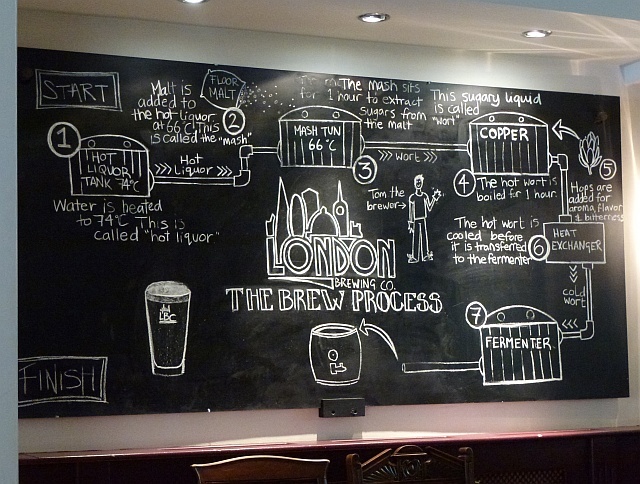 This pub was chosen by the Londonist team as part of the London Beer Quest series. It was also voted among the best pubs in Highgate by Londonist readers.

The Bull is not just a pub, but a brewpub, whose in-house brewing operation goes by the enviably all-encompassing moniker The London Brewing Company. It attracts well-heeled locals, especially from Highgate's sizeable population of American residents, but all will find a welcoming drinking and dining spot.

Well proportioned, the ground-floor bar’s décor is smartly relaxed and comfortable, with dark wood and leather and deep purple and cream paintwork. One end of the room pays tribute to the pub’s beery focus, with a large blackboard providing a diagrammatic overview of their brewing process. American and European beer-related plaques adorn the walls.

The bar includes six hand-pumps offering in-house cask ales (plus one Dark Star guest ale) and eight keg taps dispensing a safe selection of decent beers from America and Europe in addition to the inevitable Guinness and Aspalls. A well-stocked fridge lurks in the background, providing a further variety of mostly American and European beers comprising some of the better offerings from each continent.

Of the beers brewed on the premises, Hops & Mops was a classically summery pale ale, with an unsurprisingly light and refreshing palate and a powerfully bitter hop finish (a hint of what's to come decorates the bar...a veritable forest of hops). Beer Street seemed quite forgettable, but the Routemaster red ale was pleasantly balanced, again with a surprisingly bitter after-taste. The Raspberry Wheat combined a sweet fruity aroma with a dry and slightly sour taste.

The main food menu isn’t cheap, but is reasonably well-implemented, and the availability of bar snacks and sandwiches (during the day) presents some less pricey eating options. The brunch and Sunday lunch menus look promising too.

If you’re looking for a selection of spectacularly challenging or eclectic beers, then The Bull might not be your first choice. But if you want to visit a relaxed, pleasant pub serving decent food and exclusive micro-brewed beers alongside a well-selected range of those from further afield, then you probably can’t go too far wrong with this pub.