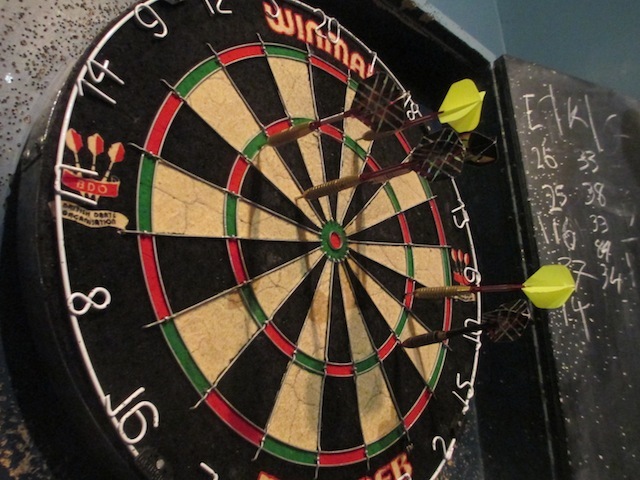 This pub was chosen for inclusion by Londonist's editorial team.

When the world was young and Londonist was a school child, the word 'Bobbins' meant 'of inferior quality; lacklustre; a bit shit'. "Noel's House Party?", we'd exclaim, "that's a bit bobbins". Happily, as each generation passes, words change meaning and we find the The Bobbin has the very opposite qualities of the show that launched Mr Blobby.

This laid-back bar is the bluest in Clapham — not in a saucy way, in a chromatic way. Every wall is painted in a soothing eggshell blue, while the outside sports a darker hue. To our left, a gasto-focused conservatory serves up seasonal favourites. To our right, things get more pubby with handful of drinking tables and, yes it really is, a dartboard. Here the fare is more likely to include one of the Bobbin's homemade pork pies or scotch eggs.

The ale selection isn't huge, though we did find a pint of Otter on tap...rare outside its native Devon. Wine drinkers are better served with well over a dozen of red or white.

Back to all Pubs Back to Clapham
Click for Comments