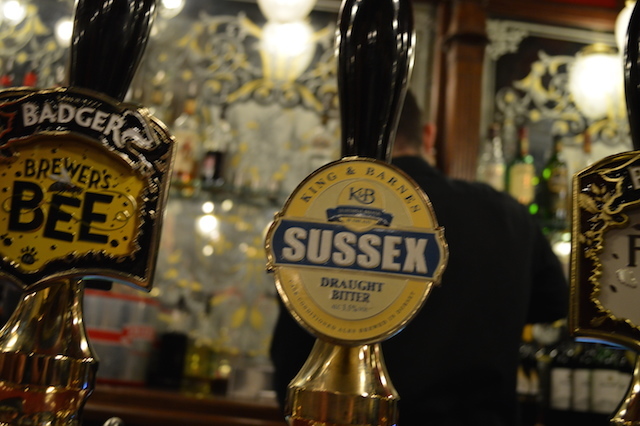 As any foo' know, the tower that everyone call's Big Ben is really called St Stephen's Tower. Only it isn't. It's now the Elizabeth Tower. Indeed, it never was St Stephen's Tower — a name that sprang from a journalistic mistake and somehow gained popular pedantic currency. The Clock Tower was the correct name, as we've discussed here.

Pointless preamble over, St Stephen's Tavern is the closest public bar* to the famous clock tower. In fact, it's right next to Westminster tube station. This means it's quite possibly the only British pub that many tourists visit. They could do a lot worse, for St Steve's is actually a thoroughly decent boozer, so long as you catch it when it isn't writhing with tourists (which we failed to do, hence the pretty dismal photos below).

The most striking feature is the decor — a riot of brass and glass that could be straight out of a Victorian gin palace...which indeed it is, albeit refurbished. Given that the pub's in a spot where it could serve lumpy mugs of poisoned tar and still get custom, we're surprised to find such a bountiful choice of beer. Despite the crowds, the pub goes back a fair way, and there's plenty of standing room outside if the weather's fine.

*There are other bars inside the Palace of Westminster, but most folk don't get to visit them.

Back to all Pubs Back to Westminster
Click for Comments