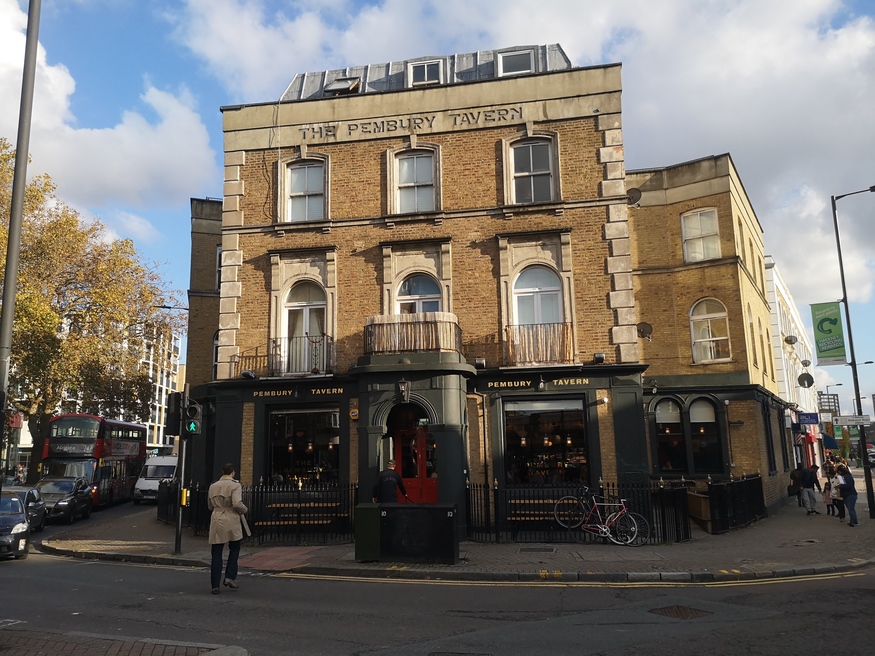 At a junction of main roads, a stone’s throw away from Hackney Downs, is an imposingly solid-looking 19th-century building that identifies itself as the Pembury Tavern. Closed in the late 1990s following a fire, it was refurbished and reopened in 2006. Formerly with Cambridge-based Milton Brewery (whose beers are still represented here). It's now Hackney's Five Points brewery who call it home.

Through all the ownership changes, there's been one constant. A strong range of beer. As you'd expect a lot of this centres on Five Points' own range — beer drinkers in east London are well used to seeing the brewery's Pale, XPA and (the exceptional) Railway Porter in plenty of pubs, but it was heartwarming to see a place for their sometimes unfairly overlooked Pils. If for some reason Five Points isn't your bag, that's fine — alternatives might include Budvar and Pavement Press cider and even grisettes.

As far as food goes, the Pembury is focused on pizza, but there's more than your standard margherita fare on offer. We tried a béchamel and mushroom offering — experimental and delicious. On Sundays that all changes, with traditional roasts on offer. They're pretty ruddy excellent too — our plentiful plate of pork was loaded with crunchy/chewy crackling, and generous amounts of apple sauce. It's certainly above your average pub roast — no wonder the place gets packed out this time of the week.

The sticky toffee pudding comes drowned in a salted caramel sauce, and must be tried (even if you're stuffed from the roast, get one to share).

The pub's decorated with mismatched furniture, potted plants and carefully planned lighting. The half and half green and white walls are another subtle but noticeable addition that this pub is aimed at Hackney's younger trendy set. There's still a bar billiards table however, for those looking to keep it old school.