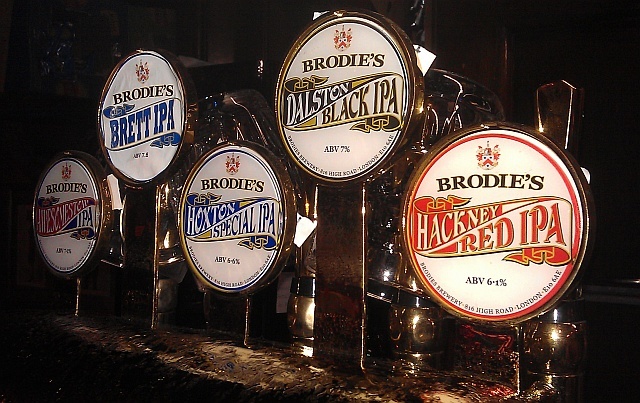 The Old Coffee House has an identity crisis. On the one hand, it is a solid, standard Soho boozer – a bustling, straightforward atmosphere, comfortable but well-worn furniture, inconsequential old pictures and mirrors on the walls, pots and pans hanging from the ceiling, a television that sometimes shows football, no-nonsense but agreeable service, pavement drinkers. Unchanged in years. On the other hand, it serves something approaching the full range of Brodie’s beers, and Brodie’s is anything but a standard brewery.

Based in Leyton, Brodie’s brewery exhibits more than a passing preoccupation with powerful hop flavours. This pub is one of only three in London owned by the brewery, and its draught offerings are rarely found elsewhere. The Old Coffee House's nine hand pumps and five keg taps offer a wide variety of pale (and India pale) ales, as well as a few other interesting Brodie’s brews.

Despite the wide range of excellent Brodie’s beers on offer, the Old Coffee House also stocks a standard range of cooking lagers and suchlike (Fosters, Amstel, Heineken, John Smiths, Guinness, etc.) as well as a normal selection of spirits, so your friends who are not interested in taste gymnastics can also enjoy themselves while you wrestle with the more interesting stuff. Smart.

One of Soho's more endearing pubs, and therefore often rather busy — though much quieter on a warm, sunny day.