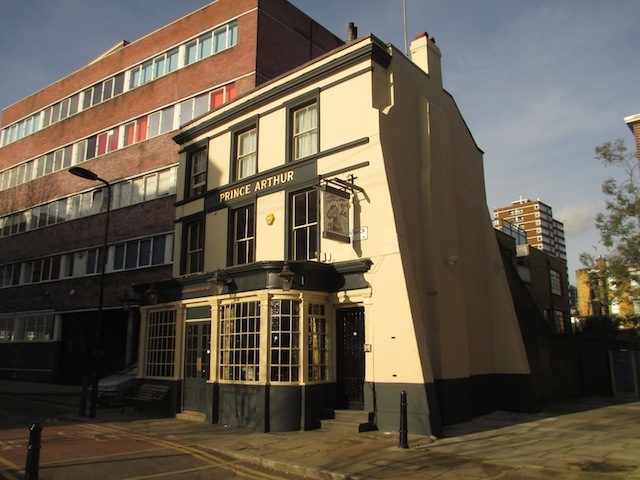 This pub was selected by the Londonist editorial team after the pub's tremendously successful makeover.

The winter of 2013/14 was notable for the storms that tore across these isles, so any pubs that offered a measure of cosy warmth were to be treasured. Step forward the Prince Arthur — a previously bog-standard Shepherd Neame boozer, hidden away on a Hoxton back street. It's now under new management, and has been transformed into a wonderful little pub.

A roaring wood fireplace takes pride of place in the corner of the downstairs bar, whose grimy carpets have been replaced by ubiquitous paneling but in a splendidly welcoming fashion. The split-level bar area is smaller than before the pub's overhaul but this only adds to the Prince Arthur's newfound charm, as does the crown of hops, dangling from the bar.

Drinks-wise, you know what you're getting from a Shepherd Neame pub — well-kept if similar ales, standard wine selection, generally nothing out of the ordinary. An airy upstairs section is now open, plus a balcony if you fancy a slightly elevated view across the street. A recent visit brought forth bowls of free peanuts and crackers, which went down well with the ale.

The walls support an unusual mix of artwork including a portrait of William Hogarth (and dog), the demolition of London Bridge, and a blood-spattered Mickey Mouse, middle fingers raised defiantly. For the caught short and confused, the toilets are through the door signposted 'Crucifix Lane', named for a street in eastern Southwark.

Oh, and be sure to inspect the bollards outside (yes, really). A couple are genuine cannon-and-balls, captured in the Napoleonic Wars. Their 200th anniversary is imminent.