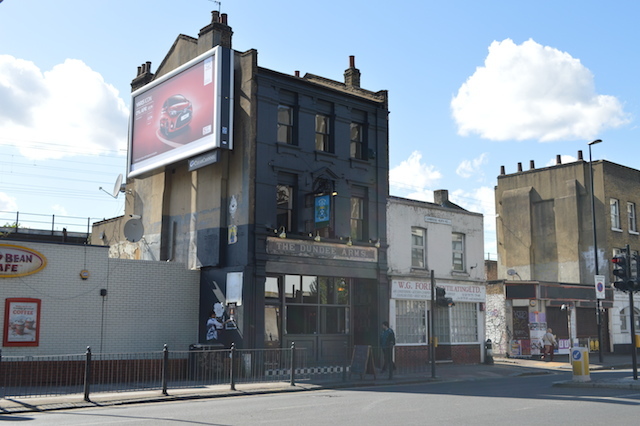 "How long's this place been open?" we inquired of the well-groomed barman. "I'd never noticed it before."

"I'm not surprised," he replied. "It used to be an absolute shithole."

Whatever it was before, the Dundee Arms is now a trendy-as-fuck shabby chic pub from the same stable as Clapton's Crooked Billet. Battered on the outside, tatty, peeling paint jobs on the inside, exposed brickwork, a selection of vintage Trivial Pursuit cards on every table — it's the very essence of the modern drinking den. The bar man was so cool, he didn't need to say thank you during our beer purchase, and later scooted off down Cambridge Heath Road on a skateboard. Perhaps he wasn't a bar man at all, and just some random off the street. His colleague, however, did a sterling job of humouring a drunk guy intent on singing the praises of our military heroes. And why not?

Otherwise, our mid-afternoon visit found a relatively quiet pub, populated only by Macbook freelancers and a mother-daughter popping in for refreshment after visiting the nearby Museum of Childhood. Things enliven at night, with regular sport screenings and DJ nights. Out back, a minuscule beer yard hugs up against the rail arches, while upstairs you'll find the Drama Parlour hair salon.

The beer range was small but well chosen. Siren's Liquid Mistress is a great find on draught, though at 5.8%, it was perhaps a little potent for an afternoon tipple. Truman's Budburst and Dark Star's Summer Meltdown were the other options.