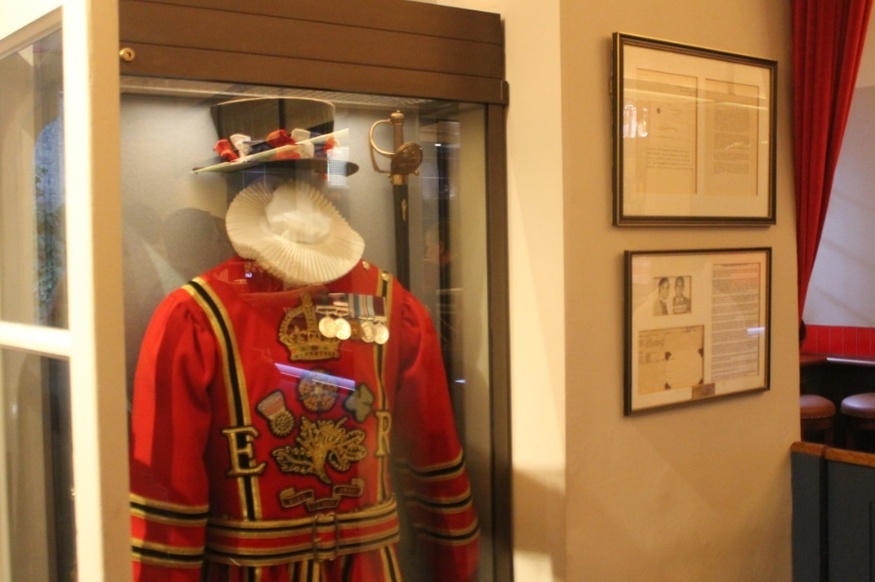 We are being a little cavalier including The Keys in our pub database, because chances are, you won't be served a pint here. That's despite it being in one of the most-visited places in London.

The Keys, you see, part of the Tower of London — and is open exclusively to the resident 37 Beefeaters and their guests.

The name is a reference to the Ceremony of the Keys — the ritual locking up of the Tower, which has taken place every night for around 700 years. Those keys are referenced throughout the pub, including on the benches outside (well, at least you can say you've visited the beer garden) and in the lobby:

It's a recent name change: the bar — which has been used by Beefeaters for all their beer-quaffing needs for around 150 years — was called the Yeoman Warders Club, as evidenced by the sign that remains on the front door:

And here's what greets you through that door:

The cherry leather seats, combined with strict dress code (our Beefeater was this close to turning us scruffy media types away) lend it a kind of boozy Houses of Parliament vibe.

What do you drink in the Beefeaters' pub? We went for gin and tonic (the brand = Beefeater, naturally). Or you can get a pint of one of these:

By the way, the people serving behind the bar are Beefeaters — they take it in turns to volunteer. That said, as they're not strictly at work, they don't wear their famous uniforms. So you'll have to settle for these unoccupied ones:

The pub is generally well-cluttered with gimcrack that follows a certain theme:

Some gimcrack is more ominous than others.

Talking of ominous, the bar also sports a framed signature of Adolph Hitler's deputy, Rudolph Hess, who was imprisoned in the Tower during the second world war:

Oh, and if you think your local hipster bar has some cool exposed brickwork, try this for size:

With thanks to Yeoman Warder Dave Phillips for inviting us into his world.