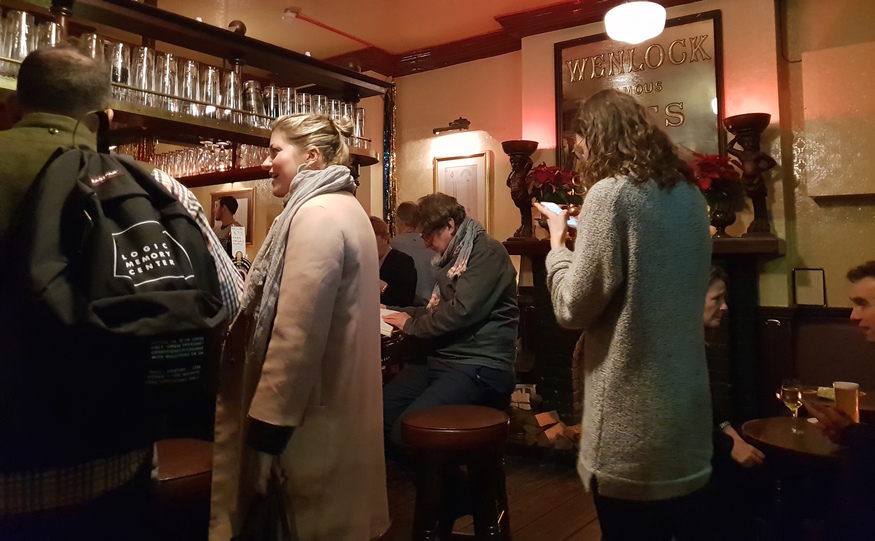 London nearly lost The Wenlock Arms a few years ago. Developers wanted to knock down the pub — which dates back to 1836 — but found their efforts thwarted by a grassroots campaign. Hackney Council stepped in to save the day, and the pub lives on.

And thank god they did, because this is an excellent boozer. Let's start with the beers. On first glance we thought there was only cask on offer — slightly odd, but that there's 10 taps means this isn't an issue. On second visit to the bar we realised there's an extensive number (20!) of keg taps hiding away behind — meaning the Wenlock caters to all beer drinkers. If you're more of a cider person that's fine too, they have seven for you to try.

Then there's the character of the place. Creaky floorboards, tacky but charming multi-coloured metallic foil lines a few windows, old brewing memorabilia and best of all a real fire serviced by stacks upon stacks of wood.

It's a real jumble of a crowd when we visit. There's a couple with a young baby, the post work pint crew and a few people who look like they remember how the pub looked 50 years ago. No one particular tribe dominates, giving off the vibe that everyone is welcome.

There's a few cheap food options: pies, baked camembert and toasties. Not going to blow you away, but perfect for peckish punters.

It's not hard to see why CAMRA awarded this north London pub of the year in 2017.