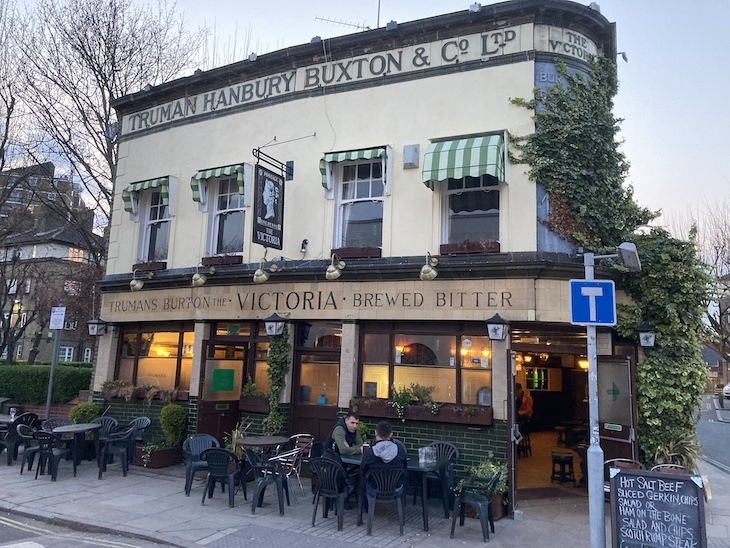 You know you're in a very special place when the first thing you see is a plaque like this:

The Evening Standard's 1972 Pub of the Year does not appear to have changed much in the half-century since it received that accolade. Wooden floors, leather seating and a beautiful horseshoe bar speak to us from another age. This pub has no Facebook page, no Instagram, and not even a website so far as we can see. A flatscreen in the corner is the only nod to modern times in one of London's best-preserved old boozers.

Even the food is a throwback. Of an evening, you can order chips, chips with cheese, chips with curry sauce, or onion rings. We ordered all four, more than happy to be limited to these stomach-lining basics.

The authentic horseshoe bar is such a charming feature that the Victoria has been scouted up for numerous TV series, including Ashes to Ashes and Life on Mars. It boasts an excellent selection of gins, and was supporting a low-key cider festival on our visit. Two real ales were on tap, along with Neck Oil — a craft beer now so ubiquitous it's even found its way into a traditional place like this.

This is very much a pub off the beaten track. It's a 15-minute trek from any train or tube — and you wouldn't be 'just walking past' unless you were local. The pub was built in the 1880s for workers at the adjacent Bricklayer's Arms train depot, which was demolished long ago and is now largely forgotten. It all adds to the feeling of being in some other, long-lost London. And we like that.

The jewel in Victoria's crown is landlord Pat McKenna, who's worked here since 1982. He immediately clocked that we were new to his pub, and greeted us warmly. Our drinks (table service by Pat) were accompanied by a folder of old photographs and memories of the pub, which were a joy to pore over (while being careful not to pour over).

We're not sure if the Evening Standard's been back since 1972, but they'd probably find the place much as they left it — as would the behatted women in the photograph above. A wonderful, timeless place that should be on every good pub-hunter's hit list.