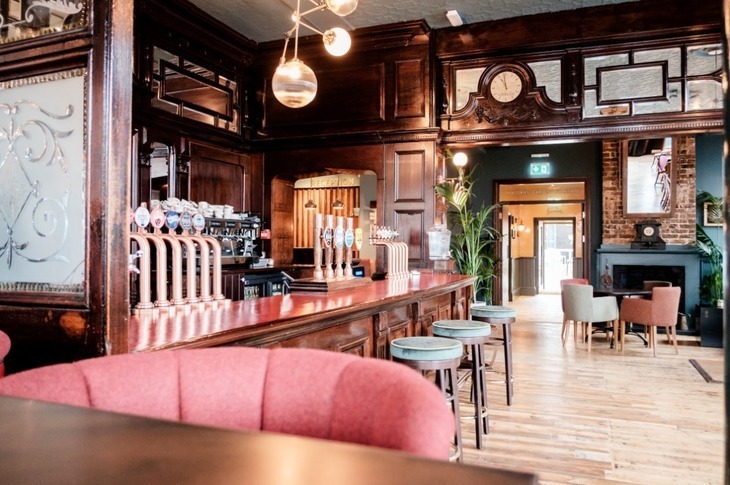 The grand, Grade-II listed pub seemed to have met its end following Herne Hill's burst water main flood of August 2013. Fuller's eventually bought the place, but not before it had been left to fester. The Great Wen has a lot to say about why the pub remained closed for so long.

Fuller's has had quite the responsibility in refurbishing the ornate boozer, which opened in 1896. It's where Dylan Thomas occasionally drank after watching rugby matches nearby, and maybe even where he began to piece together the beginnings of Under Milk Wood. The pub has also seen performances from U2, Eric Clapton, and an impromptu performance from Frank Sinatra, who dropped in to visit his old chauffeur.

Aesthetically, they've done a good job; the refit sees the pub's original windows, woodwork and painted snug mirrors brought back to former Victorian glory. A new dining area lends the building a more contemporary feel (it'll work for some tastes, but not for others). It offers some stonking looking roasts. Mike Blizzard — formerly of Shotgun BBQ, Avenue Restaurant & Bar and Bar Boulud — heads up the food offerings. Beer and wine are the usual Fuller's fare, with a few offerings from local breweries Canopy and Bullfinch.

Then there's the beer yard out back, an impressively large space. One corner is given over to a kind of drinking barn that is itself bigger than many a West-End boozer. They were screening Wimbledon to a party of school children in there on a recent visit.

The biggest change to the previous setup — and one that's caused some controversy — is the addition of 12 boutique bedrooms. They're named after the 12 men who've walked on the moon, and we can't work out if that's a nice touch or a tenuous one. But that's not the big issue; The Half Moon was previously a vital live music venue, and the use of this performance space for the new kitchen has ruled out a return to live music. As Brixton Buzz reported after speaking to Fuller's: "We were told unequivocally that Fuller's is not interested in running a music pub."

Sure, they may have the odd jazz quartet in the corner, to accompany your lamb and roasties, but if a music legend like Sinatra happens to pop in, they'll have to perform a cappella.

The added boutiqueness of The Half Moon is a move away from the local boozer vibe, and will prove a disappointment to some who've come to know the pub well. On the other hand, Peter Blair, from the Save the Half Moon Campaign has described the project as "a complete triumph", and Herne Hill has regained a handsome pub — and one that's likely to prove popular. Indeed, the pub won the title of Best London Pub at the National Pub and Bar Awards 2018.

It's not quite the Half Moon of old — a crescent moon, perhaps — but its infinitely better than the sorry-looking black hole that stood on this crossroads for four years.

Back to all Pubs Back to Brixton