The Dandiest Dandies Of London

Who? Duval (or Duvall or Du Vall) was a 17th century French gent who upped sticks to London after his family lost their title and land. The life of a highwayman soon appealed to Duval and he became the sexy, continental Dick Turpin.

Typical look: William Powell Frith's 1860 painting of Duval (below) envisages him in a silky cerise coat with great flapping sleeves and a pink-feathered hat. Sensible getup for a fugitive, then. 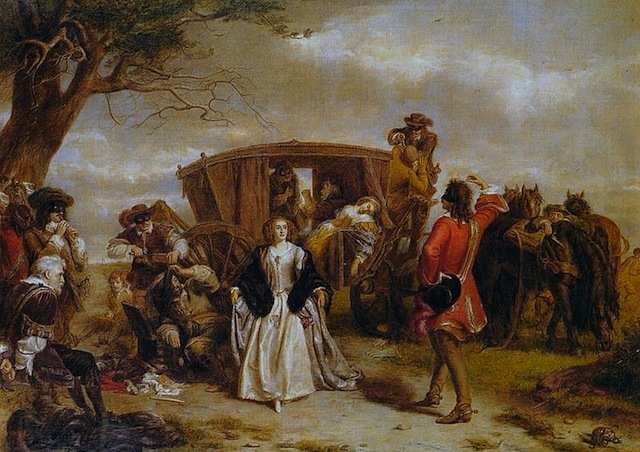 Dandiest moment: Duval was notorious for his charm offensive. The offensive half of his act was holding up coaches. The charm part came with Duval's treatment of the ladies. On one occasion, he danced the courante with a female passenger before gracefully robbing her coach. When Duval was hanged in 1670, fashionable women of London disguised themselves to attend his funeral. Many wept behind their masks.

Who? The personification of Regency dandyism, George Bryan Brummell (aka Beau) was aped and caricatured, worshipped and ridiculed. He was witty, caustic, and close pals with the Prince Regent, meaning he had no trouble borrowing a shilling or two. Until they fell out, that is.

Typical look: Brummell supposedly took five hours to get ready every day. In that time, he painstakingly bathed, shaved, and scrubbed his teeth. Then he dressed up in garb involving a linen shirt, dark coat, cravat, and trousers that went over the breeches (a novelty at the time). Testament to Brummell's sartorial sway is his statue on Jermyn Street.

Stomping ground: When in London, Brummell usually plumped for the West End. That could have been anywhere from the shops of Mayfair, to the bridleways of Hyde Park, to the theatres and brothels of Covent Garden.

Dandiest moment: Perhaps the most famous (and completely impractical) advice Brummell gave to the public was to polish their boots with champagne. An unnecessary expense, as Prosecco does just as well.

Who? The one who wrote The Picture of Dorian Gray and a bunch of poetry. You know – the one who said all those quotes on your mugs and fridge magnets.

Stomping ground: Wilde's Chelsea house on Tite Street was where many of the literary dandy's jaunts would start out. The address has now been rather blandly refitted.

Dandiest moment: Popularising the wearing of green carnations – claimed by many to be an emblem of homosexuality. Also, saying hubristic things to customs officers, which the mug and fridge magnet industry would later pounce upon.

Who? The dandiest dame in Edwardian and Victorian London, Vesta Tilley was a starlet of vaudeville who started wearing men's threads aged five.

Typical look: Though she dressed up as all kinds of men (soldiers, sailors, princes), Tilley's tour de force was well-to-do gents like ‘Burlington Bertie’, a top hat and tails kind of a chap.

Stomping ground: Tilley had her London debut at the Canterbury Music Hall, and strutted her stuff on the capital's boards until 1920. Her farewell show was at the Coliseum Theatre.

Dandiest moment: According to the V&A, Tilley's gentlemanly dress sense was so immaculate (she even wore the appropriate underwear), men themselves copied her style.

Who? Not to be confused with Gilbert and Sullivan (also natty). This inseparable pair of artists bill themselves as 'living sculptures'. If you see them out and about, it's tantamount to watching a Turner Prize walk past.

Typical look: Dandyism in double. If Gilbert's wearing it, George is too (or at least something that's complementary). Savile Row suits are the norm, rounded off with silk ties and hankies. The pair have also been photographed in matching fur-trimmed coats, and in Union Flag suits.

Stomping ground: Residing in a house in Fournier Street, Spitalfields, it's rumoured Gilbert and George stroll to the same Dalston kebab restaurant every evening to eat the same dish.

Dandiest moment: Immortalising themselves in X-rated stained glass (or at least artworks that look like stained glass).

Who? Lisp-tacular boxer who shrugged off impoverished roots to become a contemporary London dandy. Eubank might not have been born with his upper-class brogue, but it's a very real part of him now.

Stomping ground: Dulwich-born Eubank cut his teeth in Stoke Newington, Dalston, Hackney and Peckham (long before any of these were gentrified). As with many dandies, Savile Row is a favourite haunt.

Dandiest moment: Speaking of Savile Row, Eubank designed suits for outfitters Cad and the Dandy, who are based there.

Who? Contentious, drug-addled dandy who sparked many a ruckus and included in his circle of friends Stephen Fry, Will Self and Marc Almond. And his plumber.

Stomping ground: Horsley's house was on 7 Meard Street in Soho, the area of London he loved most. He had a penchant for the prostitutes here, and mourned the 'cleaning up' of Soho later on. The notice on his door is among the most-photographed signs in the Londonist Flickr pool. 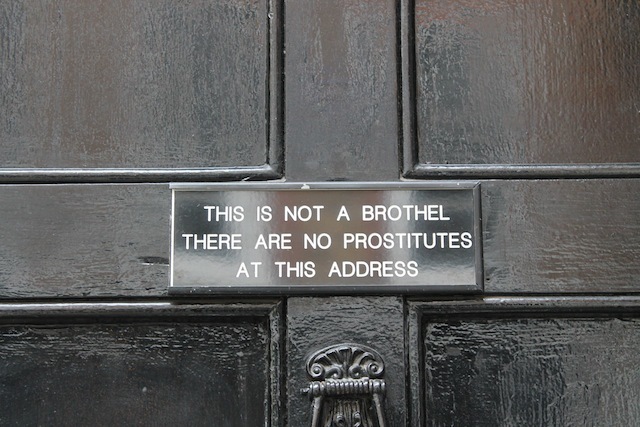 Dandiest moment: Though Horsley's getup was dandy, his behaviour was often far from gentlemanly. He nailed himself to a cross, had a sex column discontinued for being too explicit, and was barred from entering the US. Beau Brummell would have adored him.

Who? Oddball hoarder, curator and artist. Also self-appointed Regent of The Last Tuesday Society – his eclectic organisation to which all aspiring dandies are welcome. We say all...in the past Wynd has aired his disapproval of 'spotty', 'ugly' and 'poor' people.

Stomping ground: Wynd is often to be found among the treasures and debris of his 'wunderkabinett', the Little Shop of Horrors on Mare Street. In here is everything from stuffed crocodiles, to sex manuals, to shrunken heads.

Dandiest moment: Did we mention the tortoise thing? As well as that, Wynd's masked balls are semi-legendary, and often involve beautiful naked people splayed over fruit platters (NSFW, obviously).

Typical look: Visually, it's difficult to separate Fielding from his on-screen persona Vince Noir. Like any dedicated follower of fashion, Fielding switches togs incessantly. His image could be anything from leopardskin space punk to psychedelic Mexican bandit. Perhaps the most consistent description of him, though, is 'Mowgli in flares'.

Stomping ground: Born in Westminster, Fielding has largely eschewed the borough in favour of hipster haunts in Camden and Shoreditch.

Dandiest moment: Painting a huge canvas with surreal shapes and characters in front of fawning fans in Golden Square. He did a similar thing in a Waterstone's shop window in Manchester.

Peeved that Lord Byron wasn't on our list? Miffed that Russell Brand didn't get a look in? Tell us: who is your favourite London dandy?