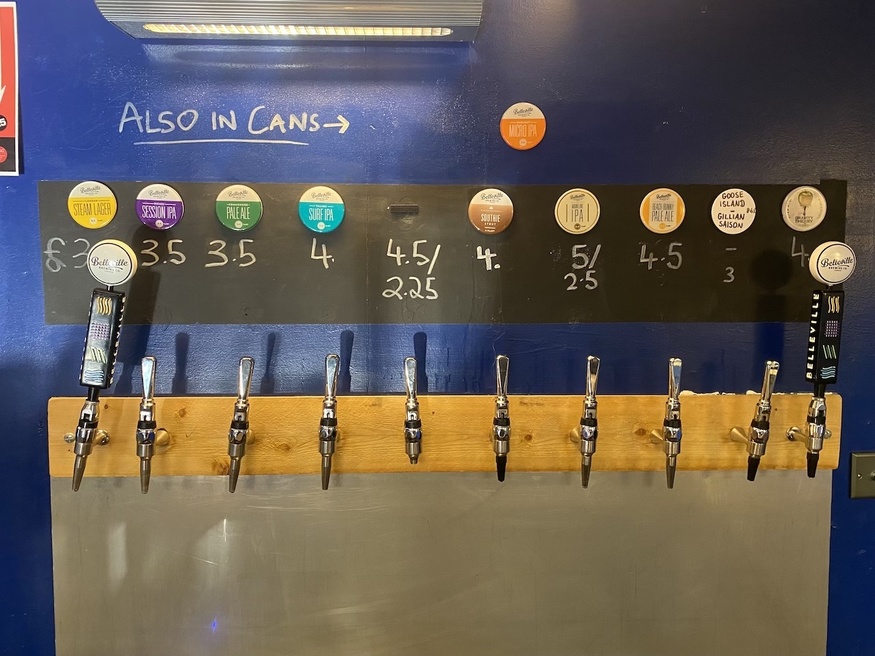 Step out the front of Wandsworth Town train station and the first thing you might see is a chalkboard advertising draught beer for £3.50. You'll probably do a double take. That can't be right, can it?

Well, it is right. The taproom at Belleville Brewing Co. — a one-minute walk, or 10-second sprint — from the station does indeed sell glasses of its deliciously fresh beer at the price of a pint circa 2010.

There is one catch: beers here are served in 2/3 pints — much like they've done for a while now at taprooms like Howling Hops. Still, that's not a bad deal, especially with Belleville's brews tasting as good as they do (The Session IPA really is incredibly sessionable).

Elsewhere, there's a solid core range on tap: steam lager, pale ale, various IPAs and a chocolatey stout called Southie (which passes the 'A Craft Beer My Dad Actually Enjoys' test), is available on our visit.

Belleville also likes to experiment with everything from DIPAs, to lemon drop sours, to its seasonal spring beer, Fruitbowl, which is packed with flavours like mango, passionfruit and pineapple. If the draught range doesn't float your boat, something in the fridge probably will. (Non beer drinkers might plump for prosecco, G&Ts or a Moscow Mule).

Not as huge as some London taprooms, nor an cosy as others, Belleville Brewing Co. is a happy medium that feels as much pub as it does taproom. Arrive at the right time and you can easily fit six friends round a table, and get stuck into one of the board games on offer (which includes tempting titles like Poetry Neanderthals and Smart Ass).

Sports fans will be pleased to see screens dotted about the place, making Belleville a shoo-in for watching the football or rugby, and not having to chug godawful beer.

And when it's time to say your goodbyes, that train's right on the doorstep. Although it might take you slightly longer than a minute to get there after a few Session IPAs...

Back to all Pubs Back to Wandsworth