Taking Down The Testicle-Free Establishment 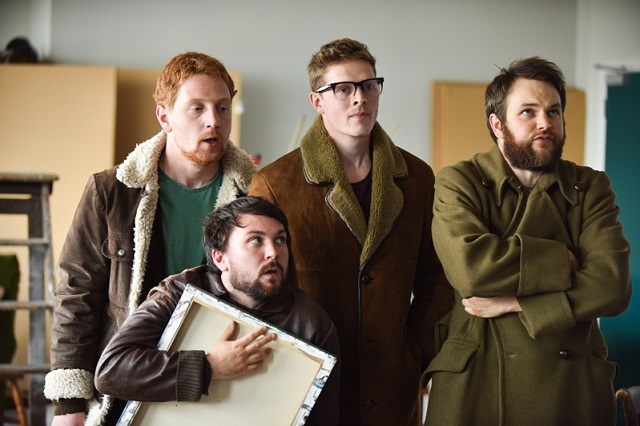 The cumbersomely titled Little Malcolm And His Struggle Against The Eunuchs is a self-flagellating comedy written by David Halliwell in the 60s following his expulsion from art school. The play is a critique of his response to that apparent injustice featuring an embittered and ridiculous anti-hero, Malcolm Scrawdyke, who is attempting to get over a very similar outrage by starting a revolution from his bedsit.

In this case Malcolm is grooming his fellow students to become the Party of Dynamic Erection with plans to overturn the testicle-free establishment via the theft of a painting and a little bit of light kidnapping. The plot is never really more than an excuse for a lot of huff and puff and some spirited play-acting in preparation for a putsch that will never come. It's good fun and the actors here, particularly Daniel Easton as Malcolm, are clearly enjoying themselves — especially as the dynamic shifts with the arrival of a young woman into the cosseted world of these backward bachelor boys.

It does seem a bit mean to have not adjusted the script so it could have been summer rather than midwinter in Huddersfield. Despite the stifling heat in the smaller studio at the Southwark Playhouse, the actors are made to sweat away in military overcoats and sheepskin jackets. So it's an especial well done for maintaining such energy and charisma for the length of the play (mercifully this revival is only half as long as the original six hour version that played in 1965 and starred Halliwell himself under the direction of a young Mike Leigh).

The script is intermittently funny, but very dated in parts — particularly a fantasy one of the lads has about an exotic black girl. There are still plenty of ranting tin pot politicos around worth sending up and Halliwell skewers the narcissism of these little Hitlers with knowing panache. In the end however, with so much context having changed since the 60s, it's hard not to see this play — which is celebrating its 50th anniversary — as much more than a ribald exercise in nostalgia.

Little Malcolm And His Struggle Against The Eunuchs runs at the Southwark Playhouse, 77-85 Newington Causeway, SE1 until 1 August. Tickets £18/£16. Londonist saw this play on a complimentary ticket.