Three years after construction halted on the Pinnacle skyscraper, its proposed replacement has been officially unveiled. Here it is, in all its, um, glory:


22 Bishopsgate will be the Square Mile's tallest building at 278 metres — not much shorter than the Shard, across the water in Southwark. It will also contain a free public viewing gallery, plus what looks like being London's highest restaurant and bar (although the Shard is a taller structure, its food offerings are on lower decks). 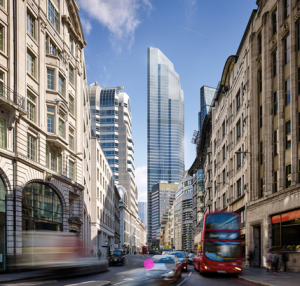 Up to 12,000 people will work in the building. The developers also promise plenty of additional features, including:

"...a range of cafés, food outlets and a conference centre, complimented with amenities such as a medical centre, library, a wellness suite, and specialised sports facilities. 22 Bishopsgate will host art installations, curated events and seminars, while on the ground floors, there will be a programme of coached sessions ranging from cookery through to language lessons."

(We hope those language lessons include the difference between 'complimented' and 'complemented'.)

While other recent towers have opted for unorthodox shapes (Gherkin, Cheesegrater, Scalpel, Can of Ham...), the new skyscraper carries a less striking profile. It's a simple-looking affair, much less showy than the original Pinnacle, which would have sported a helter-skelter-style crown. From one render, the new 'scraper looks not unlike a taller, blander version of Tower 42. It's hard to work up much enthusiasm for this proposed new landmark, which does not appear to have moved on much from early concept images leaked a few months ago.


The design was led by Karen Cook of PLP Architects, working on behalf of a consortium of international investors led by AXA Real Estate. The consortium purchased the site earlier this year. Subject to planning application, the scheme could start by the end of 2015, and will necessitate the demolition of The Stump — the concrete fist leftover from the aborted attempt to build the Pinnacle. The developers hope to be done by 2019.
Further details will be released on this website from noon today. An on-site visitor centre, with further information, is open all week, noon-8pm (with a break at 2-3pm).
Article updated with additional images at 1.15pm, 15 June 2015.