By M@ Last edited 87 months ago
M@ Try Our London Architecture Quiz
How's your London architectural knowledge? We put together 50 questions about the buildings of the city as part of a London Festival of Architecture event. It took place on 18 June on the wonderful Battersea Barge, and was co-organised with Nine Elms on the South Bank. If you missed it, we've repeated the questions below, along with a couple of photos from the night. Answers will be added as a comment on Monday.

Round 1: Name that building

A picture round. Click/tap the image below to see a larger version. 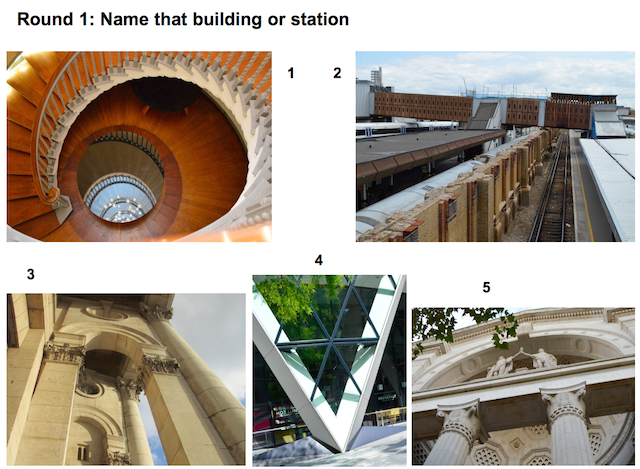 1. The Shard is almost exactly the same height as how many Nelson’s Columns?

2. By what nickname is 122 Leadenhall Street normally referred?

5. St Paul’s Cathedral was, for centuries, the tallest building in London. How many man-made structures in London are now taller, to the nearest 10?

Round 3: The ruins of London

1. For which vanished London building is Joseph Paxton chiefly noted?

2. Sir John Soane commissioned a drawing of an imagined view of his greatest architectural achievement in ruins. What building was depicted?

3. What is the tallest building ever to be demolished in London?

4. Under what London landmark were the remains of a Roman amphitheatre discovered in 1988?

5. Which comedy series had an episode in which a giant kitten destroyed St Paul's Cathedral and the Post Office Tower, as well as squashing Michael Aspel with his huge paw?


Round 4: The London that never was

1. The Garden Bridge was first proposed in 1997. Who would it have commemorated?

2. Watkin’s Folly, which was partly built in London in the 1890s, would have resembled the Eiffel Tower and stood taller than the Shard. What landmark now occupies the site?

3. Which well-known author wants to build a 46 metre tall temple to atheism in the Square Mile, with each centimetre representing a million years of life on Earth? The idea was proposed in his book Religion for Atheists.

4. Before the Magnificent Seven cemeteries opened, architect Thomas Wilson worked up plans to build a 94 storey pyramid mausoleum that would be able to house 5 million bodies. Where in London did he want to locate it?

5. The Fourth Plinth in Trafalgar Square long stood empty before the current series of art commissions. When built, it was intended for an equestrian statue of which recently deceased monarch?

Tying in to our location, on the river next to Nine Elms.

1. Which country is building a new, cube-shaped embassy in Nine Elms?

2. Multiple choice: roughly how many bricks are there in Battersea Power Station?

4. New Covent Garden Market is one of the largest buildings in the area, and the UK’s largest wholesale flower market. In which decade did it open, having moved from central Covent Garden?

5. Vauxhall Bridge includes four monumental bronze figures, each weighing two tons. One of them represents architecture. What famous London building does she hold in her hands?

Round 6: Name that view

The second picture round. Click/tap for a larger version. 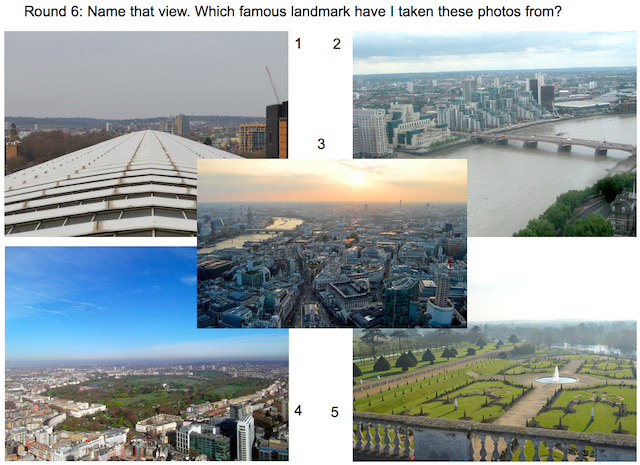 Round 7: Sing a song of London architecture…

We're going to give you a line from five famous songs. Each contains a reference to a London building or institution. What words are covered by the beeps?

1. “Early each morning to the steps of BEEP BEEP”

3. “They've won the league, bigger stars than Dallas. They got more silver than BEEP BEEP”

4. “She came from Greece she had a thirst for knowledge. She studied sculpture at BEEP BEEP BEEP”

5. “That certain night, the night we met, There was magic abroad in the air. There were angels dining at the BEEP, And a nightingale sang in Berkeley Square.”

Round 8: Odd one out

1. Which of the following is not a genuine church in the City of London?
a) St Vedast Alias Foster, b) St Mary Under Maypole, c) St Andrew By The Wardrobe, d) St Andrew Undershaft

2. Which of the following is not a building or structure by Norman Foster's architectural practice?
a) The Millennium Bridge, b) City Hall, c) Heron Tower, d) The Gherkin

3. Which of the following was not an ancient gate into the City of London?
a) Broadgate, b) Ludgate, c) Cripplegate, d) Aldgate

4. Three of the following locations contain those distinctive green shelters for taxi drivers. One does not. Which is the odd one out?
a) Waterloo station, b) Temple station, c) Russell Square, d) Hanover Square

5. Which of the following structures is the odd one out, and why? (And it’s nothing to do with the letter they start with.)
a) The Monument, b) Olympia, c) Marble Arch, d) the Mansion House,

3. What surname connects St Pancras International to a famous Ken and a famous Gary?

4. Which London building shares its name with one of the electrolysis products of water?

5. Which London building shares its name with a piece of Microsoft software?

1. Which Thames Bridge did Queen Victoria open on the same day as Holborn Viaduct?

2. Whose gravestone simply says: “If you seek his memorial, look about you.”?

3. What was reckoned to be the tallest building in London for almost 200 years, before the construction of Old St Paul’s Cathedral in 1310?

4. What is the official name of the famous tower popularly called Big Ben?

5. Name the five buildings in the Londonist logo. A point for all 5, half point for any 3. (And very easy if you're doing this on the website.)

Answers appear below on Monday. Images of the event courtesy of The Nine Elms Vauxhall Partnership. Images from rounds 1 and 6 by the author and quizmaster.