Hope, A Skip And A Jump At King’s Cross

It's now on its third regeneration, and has taken several weeks to dematerialise in one place and reappear in another, a jump of about 200 metres. The new public face of the King’s Cross Skip Garden is now behind the swimming pond at Lewis Cubitt Park.

We visited the Skip Garden just as a new milestone was reached, with the finishing touches being made to a cluster of Mad Max style structures designed and built by students of UCL Bartlett School of Architecture. The emphasis in the designs is on sustainable development, and hope for the future.


Vegetables and fruit from the Skip Garden find an outlet in the new open plan café-kitchen, where previously there was just a serving hatch. The café is not entirely self-sufficient. But if you arrive at the right moment you might be lucky enough to go to work on the single egg per day produced on site — chickens being another of the additions at the new location. There are at present three chickens, so we definitely know that chickens come before the egg here.

Egg production should increase as the hens settle down. Valerie is one of the UCL students participating in the project and she invited us inside Peckingham Palace, where her pullets perch safe from urban foxes, in a wooden polyhedron inspired by ZSL’s Snowdon Aviary. Central support is provided by a salvaged tree trunk. The walls are perforated for light and air by patterns cut by computer controlled saw. Valerie has based these on falling leaves.

Other livestock is expected soon, of the six legged variety. We look forward to trying Skip Garden honey.

The most prominent edifice here is Rachel’s glasshouse lantern, a white cube made of reclaimed windows ranging in style from municipal brutalist to bijou suburban.

When you are harvesting produce you need somewhere suitable to store it. So, the roof of one structure is intended to leak in certain places, and walls made of sacks filled with soil provide not only insulation but also reduce temperatures as the water evaporates — it becomes a cool store. Seeds in the sacks sprout herbs for the kitchen.

There are toilets on the site, with seclusion provided by a substantial wall of old railway sleepers and scaffold boards. Sewage is not dealt with here but there is a system involving plants and gravel for recycling the grey water from sinks and basins.

Piling on the Dirt


We found Jonah and Chris topping out another greenhouse cum dining area. The principal support is a rammed earth wall. A technique used in the Great Wall of China, compressing earth into blocks dispenses with the carbon emissions inherent in making concrete or baking brick. In this case the matrix is mixed from aggregate from neighbouring construction work, and London clay comes locally as a result of builders excavating the foundations of a new tower block. There’s obviously buy-in from the construction firms. The odd fragment of a discarded plastic bag protrudes. Chris calls it the Wall of 100 Hands because of all the people who have helped him in its construction. The wall acts as a thermal store, slowly emitting at night warmth picked up during the day. 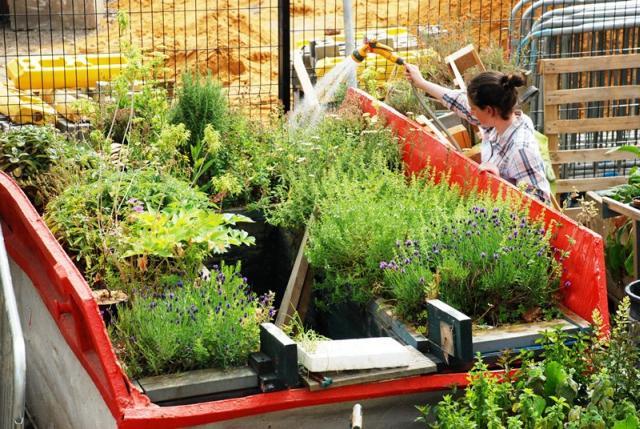 The aim of the Skip Garden, initiated by Global Generation, has always been to create the nexus for a new community by using space that is not part of the current phase of building. People moving into apartments on the redeveloped railway lands at King’s Cross find a building site around them and without the Skip Garden there would be no hedges across which neighbours could gossip. It is an enlightened response to gated developments and poor doors, and further hope for how things might be in the future.

People are encouraged by the incongruity of the garden in its surroundings to poke their head in, just as we were. Inner city schoolchildren can make friends with vegetables. Visitors may either eat or volunteer some help, maybe just watering some plants, and get to know each other. Just at the moment there’s a need for a welder or metal worker. If you have that expertise to offer, perhaps throw it on the Skip Garden.

This will not be the Skip Garden’s final home. So, watch that space!