Get on your bike and try this loop around west London full of architectural delights and green spaces. It was created by Jon Fray and Roger Mace and shared by London Cyclist magazine.

Route: From Ealing to Richmond Hill via Osterley Park and House

West London has an abundance of riches: architectural gems, landscapes, parks, gardens, rivers and canals. Cycling this route can’t be done at a fast pace, not only because of the twists and turns it takes to avoid busy roads, but because there’s so much to stop and take in. This is a good one if you fancy being a tourist in your home city and seeing things you never knew were there. The new is represented by the Northolt and
Greenford Countryside Park which has been designed for conservation and public use, while at the other end of the age range is Bushy Park established for King Henry VIII’s hunting pleasure. What these have in common is that cycling is permitted practically everywhere within these open spaces.

The loop is best tackled on chunkier (non-roadie) tyres because the terrain is varied and includes some moderately busy roads and lumpy paths.

Kingston Cyclists has produced a 20-page guide, Get Cycling, featuring six traffic-free routes in the area. The routes can also be found on bikely.com, labelled KCC1, KCC2, KCC3, KCC4, KCC5 and KCC6. 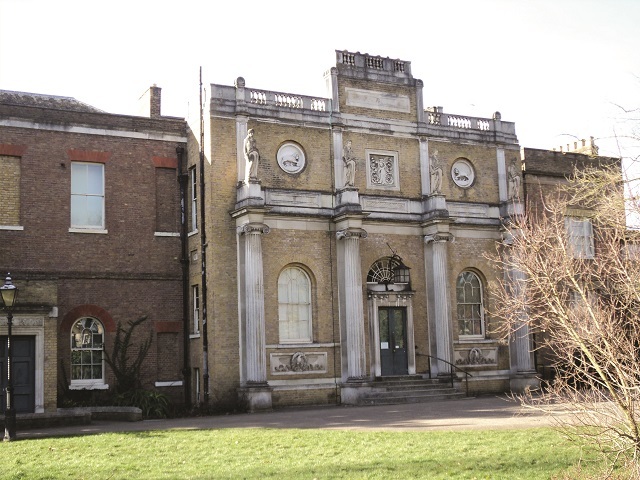 Ealing Studios, home of classic comedy films of the 1940s and 1950s, is still going strong and the reception building with its hallmark laurel logo can be seen just off Ealing Green.

Also, at the north-west corner of the Green, is Pitzhanger Manor (above), a Grade I listed home designed by John Soane in 1800, featuring Ionic columns topped with statues. The museum is currently closed for refurbishment, though the adjacent Walpole Park is a delight, particularly the ornamental lake and fountains.

Our route takes you across the busy Uxbridge Road, over Castlebar Hill, through Pitshanger Park and Ealing golf course to the picturesquely winding River Brent. 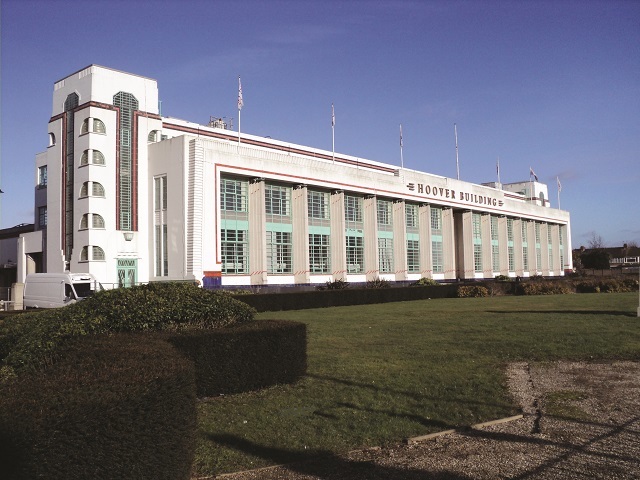 To the north of the Brent you’ll find the 12th-century St Mary’s church which is now used solely for classical music concerts (usually free). Its weatherboard tower is barely visible from the road, which makes the sighting of it all the more treasurable.

The Hoover Building on the north side of the A40 Western Avenue (above) is a fine example of Art Deco style which Poet Laureate John Betjeman and Elvis Costello, among many others, have eulogised.

The restored facade can be seen safely from the south side of the A40, but a detour via the cycle/foot bridge will get you up close to the 14 bright white columns with jet black, jade green and cherry red detailing. 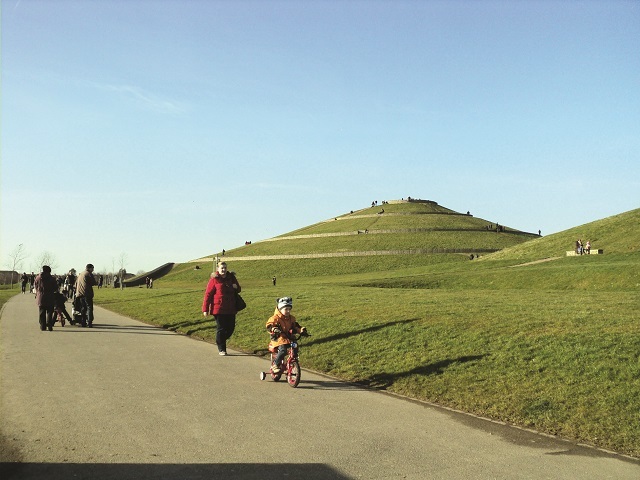 At the Black Horse pub you join the Grand Union Canal heading west between the factories and warehouses of Greenford, passing dozens of narrowboats. Turning off and over the canal you soon arrive at the great wonder of the mid-west.

Northala Fields opened in 2008, created from 60,000 lorry loads of spoil from the Wembley Stadium and White City developments. Tipping the spoil here saved millions of lorry miles and helped create the four conical mounds that children and adults alike enjoy running up and down. Unsurprisingly, on sunny days it’s swarming with sightseers. 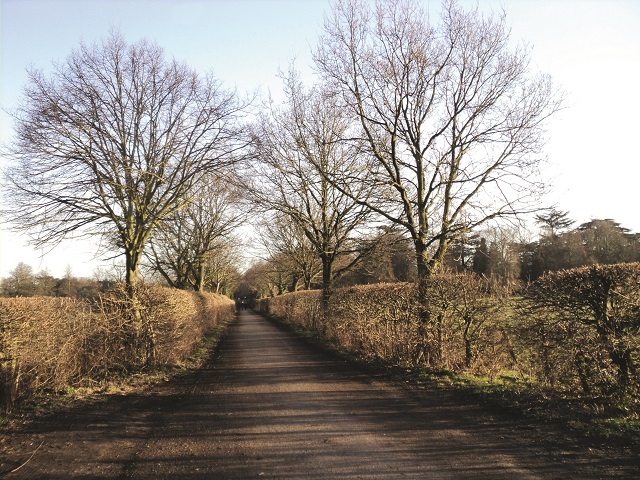 After some miles heading south through Greenford and Southall, Osterley Lane comes as a surprise and whisks you quickly over the M4 to the back gate of Osterley Park. Now managed by the National Trust, it’s a Georgian estate with a house by Robert Adam.

The park is free and cycling is permitted, but watch out for the speed dips on the driveway. As you’re under the Heathrow flightpath you’ll get as close to airliner landing gear and thrusting jet engines as you could ever want to in Isleworth, so move on swiftly to the River Crane and the delights of Bushy Park. 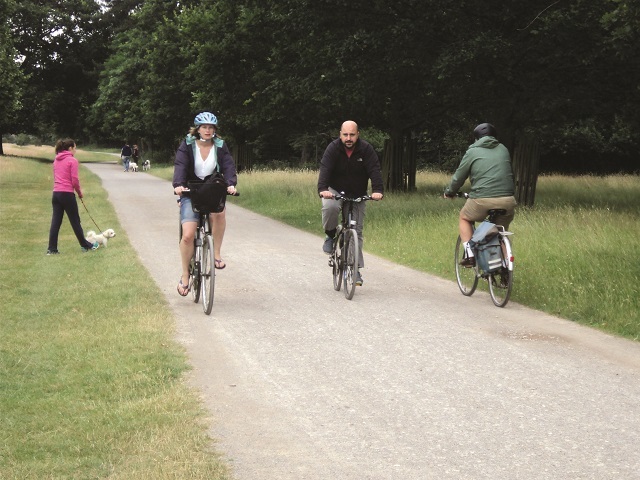 Bushy Park is a stunning enclosed space with woodland, planted gardens, ponds and extensive natural grasslands. It’s the second largest of London’s Royal Parks and herds of red and fallow deer roam freely. Formality is in the shape of Chestnut Avenue, the Diana Fountain in the middle of a huge circular pond and the recently restored Baroque water garden. Take a look at the Timothy Bennet memorial when you leave at Hampton Wick Gate. A campaigner for free access through the park, his epitaph is recorded splendidly as:‘I am unwilling to leave the world a worse place than I found it’. 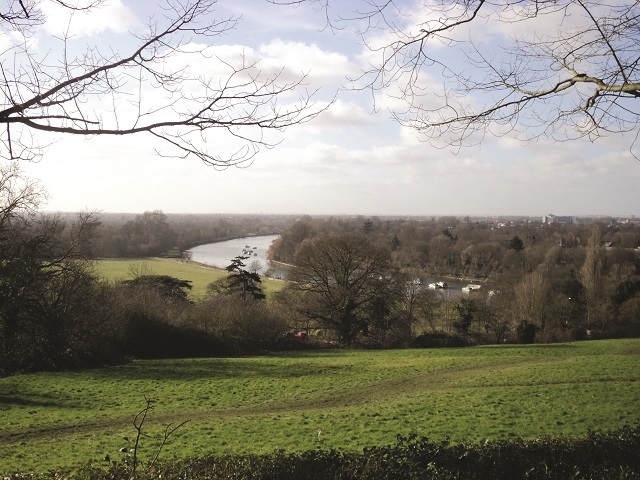 Richmond Park is hugely popular with cyclists, many simply doing road circuits, others using off-road tracks like the Tamsin Trail. Pembroke Lodge is a Georgian mansion where you might possibly feel you’re on the set of a BBC costume drama. It’s a lovely setting for a light lunch or a pot of tea. The views to the west are terrific. If you have time, rest a while on the Ian Dury memorial bench at Poet’s Corner in the grounds of the Lodge and think of a few reasons to be cheerful.

Beyond the park, Richmond’s most famous view is from the Terrace to the north of what was the huge Star & Garter home for ex -servicemen and women.

This article was originally produced in partnership with the London Cycling Awards 2015.